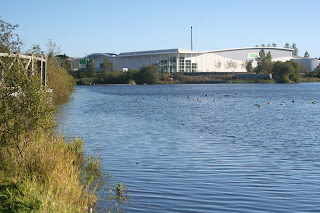 The imaginatively named newish development beside a lake in Brynmawr called 'Lakeside' was today's drop in venue. At this former Dunlop Semtex Pond were reasonably good numbers of common wildfowl such as coot, mallard, tufted duck and moorhen. A couple of wigeon and pochard were noteworthy along with a single chiffchaff.
At nearby Beaufort Ponds three little grebe and a mute swan were joined by a Police chopper.

Posted by Valley Naturalist at 19:54 No comments:

You could hear a pin drop 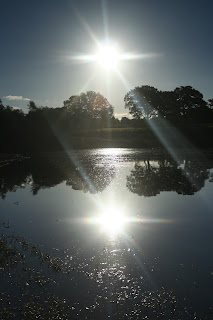 With glossy ibis, bobolink and lapland bunting all within a chip and putt of Ryder Cupland the time felt right for an early visit to Llandegfedd Reservoir to pick up a nice passage rarity. Although the reservoir was pristine in the early morning sunlight with hardly a breeze to ripple the surface of the water there was equally hardly any bird activity apart from the usually culprits of cormorant and great crested grebe. Nevertheless there were early signs of wintering wildfowl with 9 wigeon and 11 teal. Other notables were a small group of about a dozen meadow pipit, a single lapwing, three mute swan and the arrival of c140 Canada goose from some point north at 10am.
A roadkill badger was a bloody grisly sight in the back lanes to the reservoir and marsh foxtail showed well towards the north end of Green Pool. 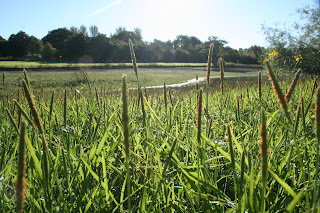 Posted by Valley Naturalist at 15:55 No comments:

Back by popular demand, the mystery bird photo. 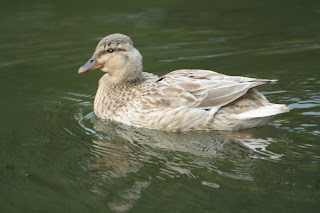 Nice to hear  there's a hunger for more mystery bird photos to help all you budding birders improve your ID skills. Much needed after the dabchick fiasco I'd say! The above thing, was on Cwmbran Boating Lake this May. Remember theres no prizes its just for fun.
Posted by Valley Naturalist at 17:04 5 comments: 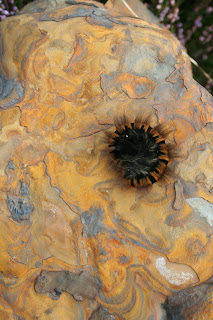 I've been seeing the caterpillar of the fox moth throughout most of this summer but was a bit surprised to find another two this afternoon at the Varteg. This one posed on a rather heavy lump of swirly ironstone. Birds, in particular meadow pipit were on the move, the odd skylark was still around and a flock of about 30 linnet was pleasing.
Posted by Valley Naturalist at 20:43 1 comment: 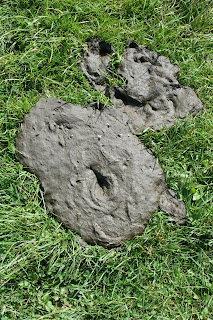 According to the book British Soliderflies (Stubbs &  Drake) theres still time to see the hornet robberfly in all its cowpat dwelling glory. So after a spot of morning bird ringing out of bounds at Llangorse Lake I called into one of this diptera's more recent hunting grounds at Castle Meadows, Abergavenny. Plenty of shoe hugging pats were on offer in varying stages of crustiness but no damn flies. Never mind did find some white spindles Clavaria fragilis as a consolation. 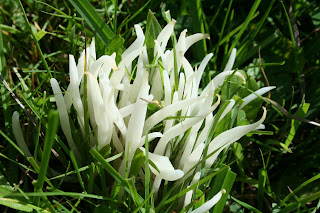 Posted by Valley Naturalist at 20:08 No comments:

Conehead: Usually disparaging. An intellectual, especially one with little or no interest in mudane affairs. 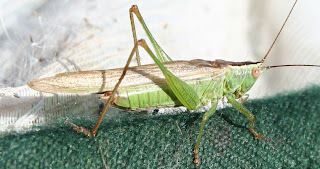 This dictionary definition just about sums up my 13 year olds opinion of  naturalists. However to naturalists a conehead means either the short or long winged version, the latter of which has witnessed a remarkable expansion in distribution over recent years.

It was not too long ago that the first Welsh long winged conehead was discovered close to the Coryton roundabout near Cardiff since then its become the mainstay of rank grassland throughout south Wales. The individual above was photographed last weekend in Abergavenny near to a pond at the rear of the former Coopers Filters Works. Their power of dispersal were evident when confronted by one flying strongly at head height.

Posted by Valley Naturalist at 16:21 2 comments: