In the bin Herring Gull 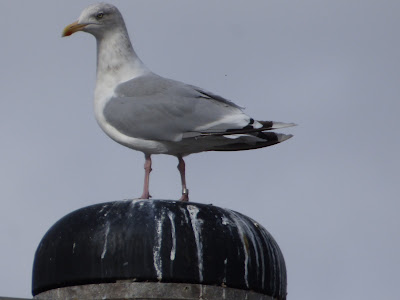 A few years back I caught a fleeting glimpse of an adult herring gull swooping from lamp post to lamp post carrying just a metal ring. This was unusual as larger Larus are generally accompanied by a colour ring. The bird, in the car park of one of Newport's out of town retail parks, was obviously patrolling for discarded fast food. At the time I dismissed the chance of ever making contact with this bird again, regarding it as one of those frustrating one off encounters that was of insufficient quality to establish a ring number. As I know this retail park to be good for small numbers of loafing gulls, mainly black-headed, I took the opportunity, whilst in the area, to drop in again.

There were around 20 black-headed gulls, some standing motionless others sitting on the warming grey surface of the car park. A group of first year herring gulls were picking at a collection of car park litter, pulling at wrappers and calling loudly like a group of Friday night teenagers. Close by was a bin - why put litter in a bin when you can just throw it on the ground - with another small group of first year gulls. However, perched on top of the stainless steel rubbish receptacle was an adult herring gull carrying a metal ring. The bird made intermittent attempts to access food buried in the bin.  Opening my car door in an attempt get hold of my camera that was hidden away in the boot the bird took flight only to alight on the roof top of a distant building. Relocating a safe distance from the food laden litter bin I waited hoping for the return of the ring carrying bird. The bird did eventually return but disappointingly only chose to move between lamp posts, so once again I was unable to secure the number on the ring.I'll try again. 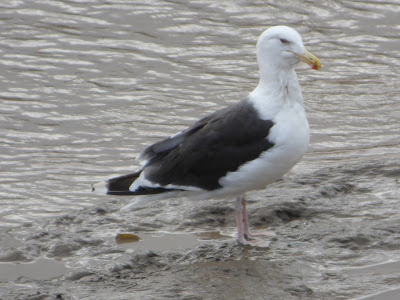 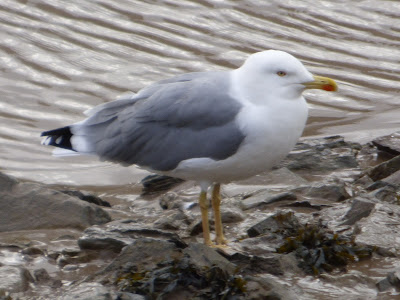 On to Riverfront Newport for the falling tide of the River Usk, the number of black -headed gulls are building yet the larger gulls remain surprsingly low in comparsion to previous years. Nonetheless, I could pick out an adult great black-backed gull along with the now regular yellow-legged gull. Scanning the rest of the tideline gulls it was pleasing to pick up a couple of Peter Rock's colour ringed birds from Bristol. 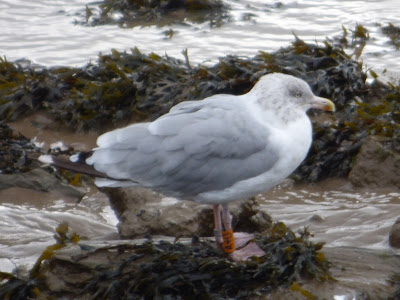 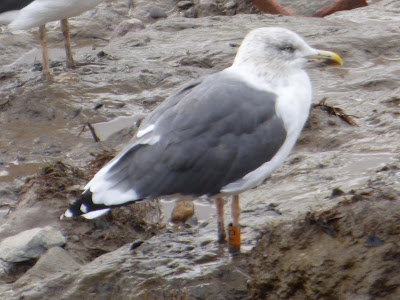 Posted by Valley Naturalist at 07:37 No comments: