A lack of respect? 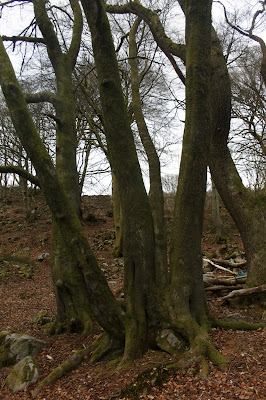 There's a small pull-in on Waterworks Lane just below the now decommissioned Nant y mailor reservoir. I maneuvered carefully to avoid a pile of bricks and bare, brittle, privet hedge cuttings. A cream coloured plastic casing from an early model computer monitor had been thoughtfully deposited out of harms way. I kitted up for my naturalist ramble around this part of Lasgarn Wood but before moving off I took the opportunity to peer into the adjacent stream. Here is an impressive stand of ramsons sweeping down from the mixed woodland to the waters edge like a green succulent carpet. Too early for these plants to be showing their distinctive white flowers but ample compensation came in the form of a pristine looking 'white goods' microwave and several black bags some with spilling contents.

Back tracking a few yards to where the stream travels under the lane through an attractive stone culvert is where toothwort often grows. Here the micro climate has changed. A ham-fisted attempt to lay a hedge has changed the feel from a dark humid environment to one that is much brighter. There were no toothwort.

I plodded on, up a steep gradient to view the now out of commission and disused Nant y mailor Reservoir, It's scruffy, unkempt demeanor stimulated a memory of better days. My formative years were peppered with birding excursions to the Lasgarn wood at a time when this reservoir was full and managed. A local hill farmer was employed to cut the grass, paint the metal fencing and shout 'oi' to anyone risking a better look at the environs of this small waterbody, where dipper, kingfisher and common sandpiper were exciting finds for a Young Ornithologists Club member.

The part-time reservoir caretaker was notable for is attire. A typical sheep farmer who's preferred mode of transport was a gun metal grey Massey Ferguson tractor driven at a time when black and white metal number plates were still common place on. Bill, who's going out footwear was always turned down wellies, wore a donkey jacket with style kept together with contrasting baling twine. His threadbare flat cap, complete with grubby, waxy handling zone on its peak was no doubt purchased from a local gentlemans outfitters, was positioned at a jaunty angle and saw many a tupping season. A thin rollie completed the look. A nice man of few words, his Desperate Dan looks were matched by a voice that displayed an interesting vocabulary based on a combination of  'heal, heal', 'come bye, come bye', and  'damn you' interspersed with a impressive whistle fashioned through an irregular set of teeth. 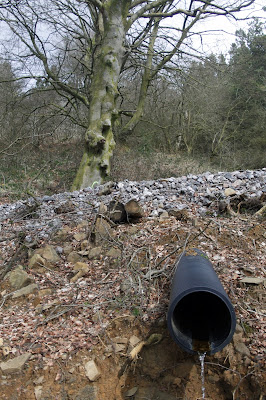 Pushing on and leaving the reservoir the walk took me through a metal kissing gate and briefly on to the mess that's recent clear- fell. Three siskin sang loudly overhead. Thankfully I didn't need to go far to drift back into mature native beech woodland. Had I been taking part in some trial to measure the value to health and wellbeing of nature here my blood pressure would have surely improved. Large sentinel like beech and oak where calling nuthatch and green woodpecker were clues to its longevity. Ground flora of emerging bluebell, wood sorrel and opposite leaved saxifrage added to the picture. 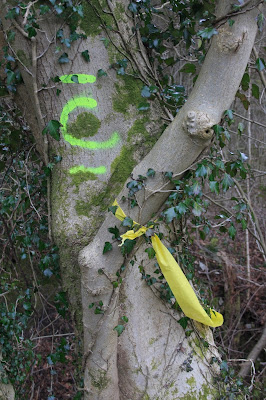 Beyond this ancient woodland is another large area of clear fell. Not content with removing the larch those engaged in this work cut a swath through the beech, hazel and oak setting down a hardcore track complete with simple drainage. Although the tree feller's pillaging is over a legacy of disrespectful clutter remains. A number of the smooth barked beech were daubed with yellow paint along with the liberal use of marker plastic tape. Overall its a mess!

Posted by Valley Naturalist at 19:28 No comments: