Blast furnace slag a substrate of some interest 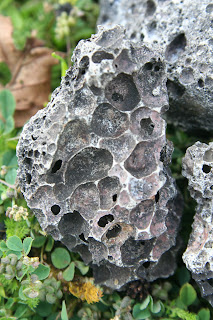 There's a south facing bank around the back of the Gilchrist Thomas Industrial Estate in Blaeanvon that's entirely made up of blast furnace slag.  Although this bank is sparsely vegetation the plants that occur are worthy of mention. Field madder, carline thistle, wall pepper, and various cranesbill etc. etc. all jostle to for the nutrients required for growth in this hostile environment. 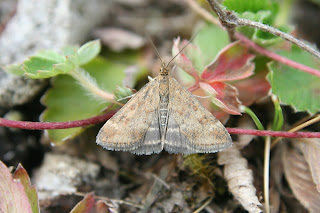 Trying to keep my footing amongst the unstable slag I kicked up no end of micro moths many of which weren't worth pursuing due to there size and my unwillingness to fiddle with their genitalia in order to get an identification down to species level. All was not lost however as a couple were vaguely familiar enough to photograph and identify, namely Pyraustra despicata and Pyraustra purpuralis both widespread in the vice county. 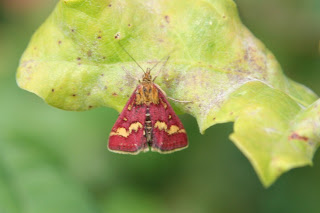 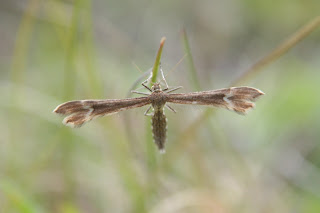 Away from the blast furnace slag and on to a nearby road verge I came across this attractive moth called Marasmarcha lunaedactyla, flying around its food plant is restharrow. A fly past black darter dragonfly and several marbled white rounded off the evening. 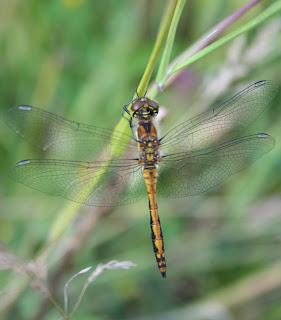 Posted by Valley Naturalist at 19:27 No comments: Links to this post

Second visit to Llandegfedd Reservoir within a week - I'm really making my access tax work! The meadows around the north end are probably more interesting than the watery environment at the moment, and a stroll around this grassland habitat revealed a good number of marbled white, ringlet and gatekeeper, supplemented by both large and small skipper butterflies.

The best find in amongst the myriad of lepidoptera was this little beauty, the Essex skipper. Widespread in southern and eastern England its been expanding its range into Wales with the first record from Gwent 2000.
Not an easy species to separate from its close relative the small skipper apart from the very distinctive black tips to its antennae.

Day flying moths were also evident including the silver y and the butterfly like shaded broad bar. Also photographed was the mint moth Pyrausta aurata.
The draw down zone is always good value for ground beetles, although a high water level restricts available search areas. Plentiful at the moment is the four spotted ground beetle (Bembidion quadrimaculata).
Bird wise, forget it, just one common sandpiper and a few sand martin. It's a measure of how birdwatchers have abandoned Llandegfedd when an elderly man who has paid his annual access tax of £8 only to walk around a nice environment, mentioned that I was the first birder he had come across this year!
Posted by Valley Naturalist at 18:43 No comments: Links to this post

This is A:D the colour ringed lesser black backed gull who frequents the Mendalglef Retail Park in Newport, relocated mid week on a family outing to Next. This bird along with many others is happy to spend its time loafing about on the tops of buildings and lamp posts but will swoop mercilessly in pursuit of a discarded Wotsit. Ringed as a nestling on the rooftops of Bristol on 20 June 2003.
Posted by Valley Naturalist at 09:23 No comments: Links to this post

The effort some people go to to fly tip is mind boggling. This kids plastic JCB was dumped along with assorted other stuff well off the beaten track at Canada Tips, Blaenavon and could only have been accessed by someone with a four wheel drive.
Late Sunday afternoon was a touch overcast which suppressed bird and invert activity. The odd mottled grasshopper and scarce blue tailed damselfly were noted and another patch of fir clubmoss. A patch of about 20 adders tongue fern found a couple of weeks ago proved difficult to relocate. The only significant bird was a very vocal peregrine that alighted several times on one of the many spoil tips.

Posted by Valley Naturalist at 17:42 No comments: Links to this post

I reluctantly paid my 'take advantage of birders tax' for access to some Welsh Water sites. This years payment represents a modest 33% increase on last years cost thereby trumping (Donald) percentage rises in the Retail Price Index, petrol, council tax and even energy bills - I look forward to next years hike! As a case study in excluding/restricting/managing access to a fair chuck of prime habitat look no further than this as an example -so much for the well-being agenda! Its not hard to see how things would have panned out had the Government allowed the sell-off of Forestry Commission land in England - barred access and charges!
Rant over for the time being - although I will no-doubt revisit in due course- a female mute swan close into the dam wall was something of an unusual sight en-route to the north end. The meadows on the Island and towards the Bert Hamar hide are rich in invertebrates at the moment. Upwards of 30 marbled white with the odd red admiral, small copper and small skipper mingle with meadow brown.
Bird wise all the usual jokers were showing well, 150+ Canada goose, with the odd barnacle thrown in to keep us naturalists on our toes, good numbers of great crested grebe and cormorant. Reed warbler were vocal and a party of five bulky finches calling loudly as they took flight from the mature oak on the island are accredited as being hawfinch. Otherwise a single common sandpiper and a couple of 'hush hush don't mention' birds was the ornithological tally.
Posted by Valley Naturalist at 09:53 No comments: Links to this post

My wife's usual forensic examination of all fresh vegetables for creepy crawlies turned up this little sap beetle that goes by the name of Gilschrochilus hortensis. Widespread in eastern England I assume it was transported with the cauliflower.
Posted by Valley Naturalist at 19:39 No comments: Links to this post

Worn to ward off harm

According to my Observers Book of British Folklore there's a superstition that a dried frog worn in a bag round the neck of a child as a charm, will ward off harm. I'll be asking my son to wear this to school tomorrow - don't think he's going to co-operate some how!
Posted by Valley Naturalist at 21:20 1 comment: Links to this post

A whole year or more has past since picking up the first unmistakable tones of a forestry clearing nightjar close to Blaenavon. With the breeding season starting to tail off I couldn't wait any longer to sample that dead giveaway 'purring' (see recent GOS web entry) or the opportunity would be lost for another year.
A 9.30 pm arrival was still just light enough to photograph a male whinchat and watch a bat disappear over the horizon. Sitting in car in a lay-by on a mountain road is a lonely existence and does illicit some looks from passing motorists - I was offered drugs and a sprig of lucky heather -  but by 10.15 pm with no sight or sound of nightjar and  the pull of a post mortem of Andy Murray's exit from Wimbledon on Radio Five Live I decided to wrap it up head home. But not before one final attempt at picking out the calling of this bird from the background hum of my tinnitus. Then at 10.18 pm there it was one bird, but not from the confines of the FC clearing but from the moorland edge. I left happy.
Posted by Valley Naturalist at 08:41 No comments: Links to this post