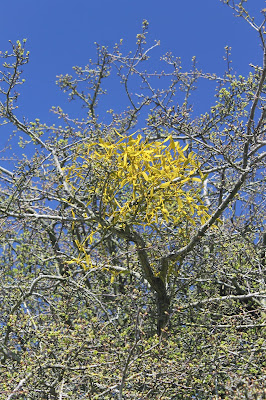 It was the dream ticket, a sunny spring-like Sunday when the clocks moved on. Emerging onto the main road to Pontypool I passed a phalanx of middle aged male cyclists in a uniform of black and yellow Lycra. Rows of terraced housing were pock marked with residents cleaning windows and arranging pots of daffodils. My mind drifted to the power tool aisle at B&Q that would surely be popular with DIY enthusiasts eyeing up a new tool for the coming outdoor season.

Llandegfedd Reservoir was similarly popular, anglers where lightly spread across the water and around the banks. I'd hoped to touch base with the recently present black-necked grebe but with this level of recreational use prospects were low. Deploying the scope I strained to find any waterbirds. With some effort the ever present great crested grebe and cormorant along with a small raft of gulls including two great-black backed were noted. 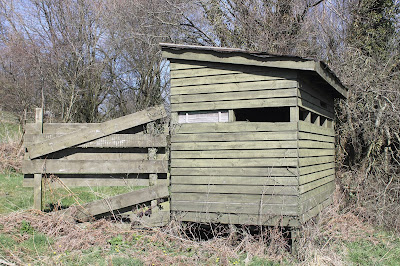 At the Bert Hamar Memorial Hide an early spring comma butterfly moved between the flowering heads of lesser celendine. I picked up a couple of singing chiffchaff as I gave the hide a once over for defects. Without maintenance its clear this structure has an uncertain future. My mind drifted back to  B&Q and all those eager domestic repairers, if only I could encourage a few to try out their new power tool purchases on the hide it would be sorted in no time.

I abandoned my efforts to get to Sor Bay when an evenly spaced line of bank side fisherman were seen to dominate with their whip lashing lines. Back at Green Pool the common toads were clearly in an amorous mood - croaking, swimming and gathering around any willing participant. Around the Island I could clearly see the change in meadow grassland structure following the agricultural reseeding of part of this species rich meadow. This action should have been subject to an application under the Environmental Impact Assessment (Agriculture) Regulations, but my Tweet to Welsh Water last year about this matter was met with ignorance and waffle. Turning over some driftwood I located a 22- spot ladybird and the snail killing beetle Silpha atrata. A small bare earth bank had a persistent early mining bee Andrena haemorrhoa looking for a nesting spot. 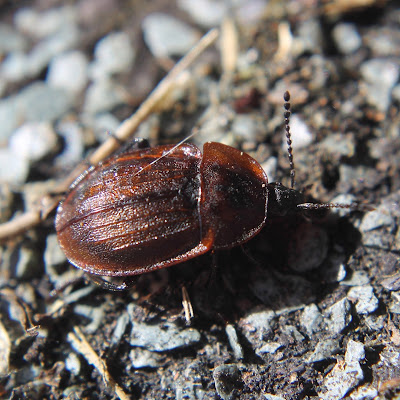 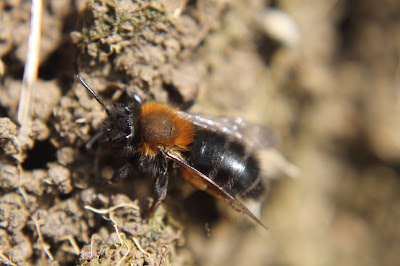 Posted by Valley Naturalist at 11:24 No comments:

Taking of the crumbs

The weather is mild and spring like as I unwrap my sandwiches to a backdrop of singing goldcrest and great tit. A dipper passes north to south calling on its way. Cwmbran Boating Lake at lunchtime is marked by an increase in human activity. Soon the hordes of black-headed gull, the cormorant with the unreadable metal ring and the goosander will vacate, allowing park goers to enjoy that characteristic bird community of an urban parks, that is Canada goose, coot, moorhen and mallard and to complain about bird droppings.

As my sandwiches are reduced to a pile of laptop crumbs I catch a movement from within a nearby stand of phagmites. Then a straight bill reveals itself from the margins of the vegetation and within a moment a water rail with its busy searching demeanour is in the open, exposed and away from the safety of its botanical hideaway. A coot drifts in, both appear happy and willing to take whats left of my carefully crafted salad sandwiches. A dog walker passes oblivious to the potential of a close encounter with a shy, skulking water bird. Reaching for my camera - a standard accompaniment on my midday office escape - I fiddle with the settings dial to find video and start filming. After several seconds the bird has had enough and with a gently rustle its generically induced agoraphobia forces it back into the seclusion of the straw coloured waterside reeds.

Posted by Valley Naturalist at 10:27 No comments: 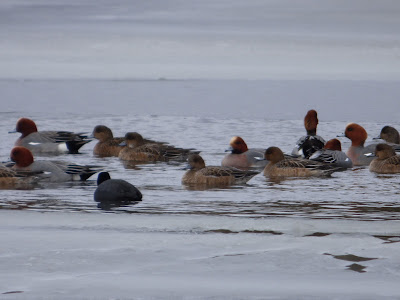 Mopping up some annual leave this past week and as usual I've been too ambitious with my plans to get out and about. Firstly, the snow required successive days of digging and secondly my wife's assertion that painting needed to be done and prioritised. That said yesterdays shopping visit to Brynmawr gave me the opportunity to squeeze in a bit of birding.

All three lakes visited were more or less frozen. Machine Pond was completely iced over with only a hardy party of mallard remaining in residence. It was a slightly different story at Beaufort Pond whereby an area of open water had attracted a gathering of wildfowl. Here a pleasing flock of 33 wigeon mingled with mute swan, coot, tufted duck and mallard. A few larger gulls preferred to rest on the ice.

At Dunlop Semtex Pond the returning hordes of breeding herring and lesser black-backed gulls had arrived to find their chosen rooftop site demolished. However this didn't stop the birds gathering at ground zero, no doubt wondering what had happened. As herring gull is a species of principal importance in Wales as set out in section 7 of the Environment (Wales) Act 2016 will the planning authority in this area seek to re-establish this colony as part of any new development? With so much bad press around urban gulls I suspect this answer to this will be no. 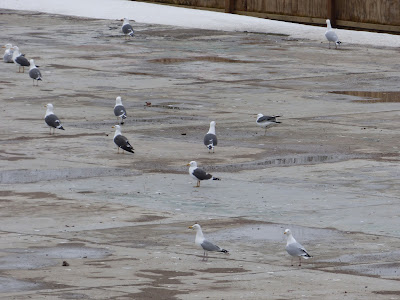 The Dunlop Semtex Pond was also largely frozen, but judging by a group of standing gulls that appeared to sinking, the ice was thawing rapidly. All the gulls here were herring or lesser black-backed with many in prime breeding plumage. I was joined by Nicholas Beswick who reported that a first winter Iceland gull had been present only an hour previously. I scanned the birds one more time for something more notable but the only thing I could find was a blue colour-ringed lesser black-backed that I suspect is the regular breeding bird CHL that was ringed in Gloucester and winters in Spain. 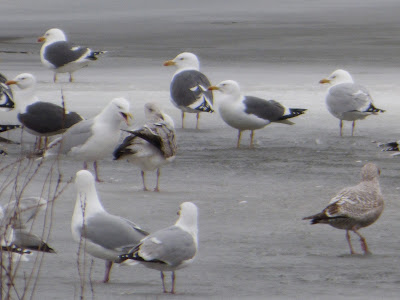 Posted by Valley Naturalist at 09:23 No comments: 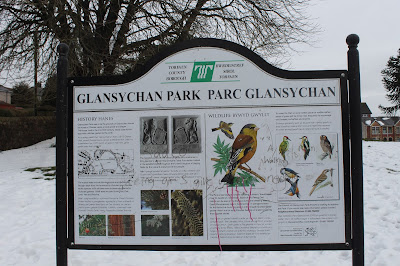 With social media going gaga over a fall of winter thrushes, I visited my local park on the way back from dropping my car into the garage. Despite at least five bins and a dog control order in place there were still fresh dog fouling to contend with. A couple of mature holly trees had dropped a good crop of berries that were attracting a number of thrushes. Sitting on a nearby bench I watched as upto four fieldfare dropped out of the nearby monkey puzzle tree onto the now bare snow free ground to feed. These birds were joined by a couple of blackbird upto three song thrush, a single mistle thrush - a small party of redwing stayed in the tree tops. Other notables included finches of green, gold and bull. 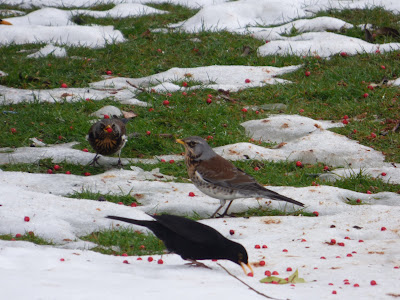 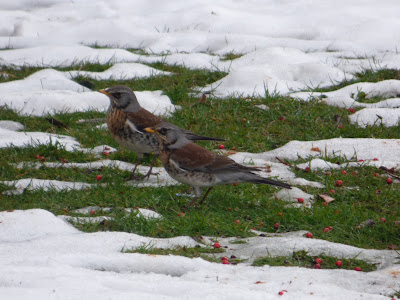 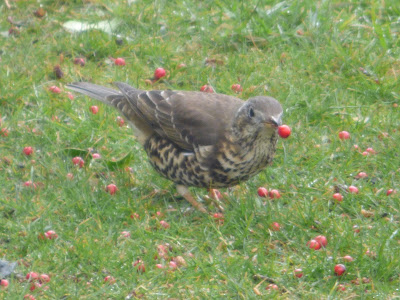 Posted by Valley Naturalist at 12:58 2 comments:

Posted by Valley Naturalist at 20:56 No comments: