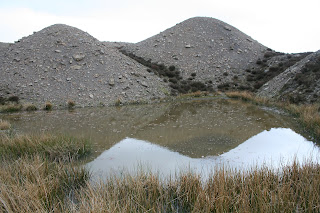 Pushed to chose my favourite habitat I would probably plump for that associated with our tin can post-industrial landscape. It's the randomness of this habitat that fuels my facination with nature, chuck in some wetland features for good measure and I could almost believe in God. But this form of local distinctiveness and sence of place is becoming rarer than a teenage naturalist with the successive actions of government agencies effectively smoothing out these landscape wrinkles like an iron over a freshly dried pair of Levi's. Take the Old Town Dock riverside 'improvements' in Newport, gone is the unkempt land of Newport's industrial heritage where children made natural play amongst twisted metal and where saliors danced the hornpipe, in is bright new build with draughtsmen designed green space of rye grass and lollipop trees. Its therefore not hard to see why nature continues in free fall decline! 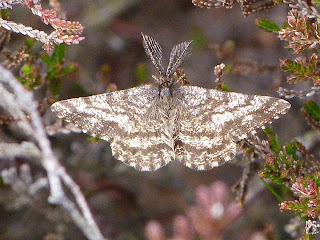 Thankfully there are still some brown  spots left in Gwent where an old fashioned, miserable, notebook carrying naturalist can pursue his socially bizaar activities in contempt of modern ways. A midweek evening cobweb busting stroll around Canada Tips, Blaenavon is just enough to recharge the energy cells. Although the chilling wind suppressed much that needed to take to wing to survive just being in this landscape was enough for me.
﻿
Posted by Valley Naturalist at 09:13 1 comment: 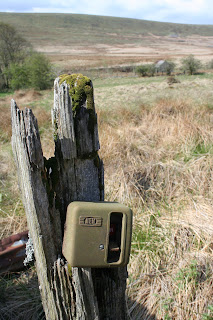 Once again that electric buzz of the grasshopper warbler was absent from the normally reliable Waun afon bog area this morning.Seems like a bit of a population crash unfortunately. 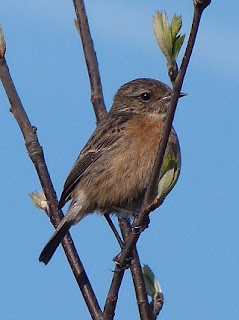 A poor bunch of birds was brightened by a couple of pairs of reed bunting and a pair of stonechat carrying food. Common whitlowgrass was the best find on the flowering plant front. 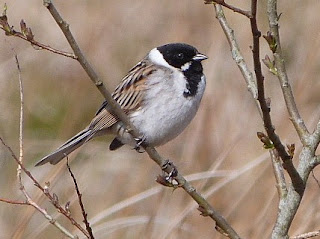 ﻿
Posted by Valley Naturalist at 20:10 No comments: 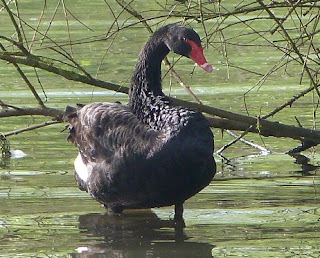 ﻿
Green Pool Bay at Llandegfedd Reservoir was as diverse as the inhabitants of a high rise block of flats in Leicester. Tensions were running high between the single recently arrived black swan and two rather aggressive Green Pool Defence League resident mute swans. These birds regularly exchanged white on black pleasentries with the harassment of the black swan painful to watch. Suggestions that Australian blacks are more aggressive than the north European whites was certainly not the case on this occasion. All this commotion was witnessed by a male Mandarin duck a number of Canada goose, great crested grebe and a singing reed warbler. Elsewhere 1000's of adder tongue fern were starting to show nicely within the meadow grassland on The Island.
Posted by Valley Naturalist at 11:04 No comments:

Stag's horn clubmoss - not much to look at, yet! 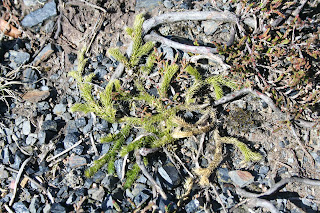 ﻿
The target species was the grizzled skipper recorded in the Blaenserchan valley a couple of years back. As a spring emerging butterfly, with the weather suitable and best of all on my local patch all appeared in order for a recording result. 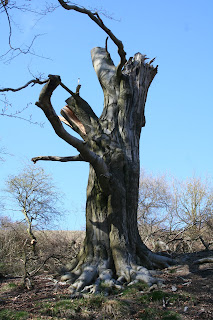 First up was a plentiful and very active population of the bee fly Bombylius major visiting the abundant track side flowering dandelion spp. Here too a speckled wood sunned itself. Where the valley opened out into all its post industrial glory the first green tiger beetle Cicindela campestris took a short flight before landing and running in characteristic fashion. Further coleoptera interest was provided by both adult and larval bloody-nosed beetle Timarche tenebricosa Six individuals were noted in total.  A cuckoo called to a background of a least two redstart, numerous tree pipit and a distant wood warbler. 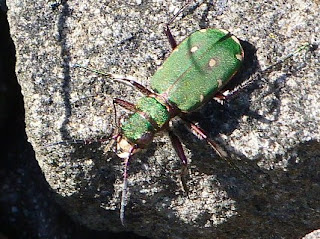 ﻿
However,r none of the above comes close to the find of the day. Stags horn clubmoss Lycopodium clavatum is a scarce plant in vice county 35 with the Flora of Monmouthshire giving just a four or five records since 1970. I have seen this species recently as a healthy plant exists on the Blorenge which often reduces visiting botanists to a opened mouthed wonderment when in its fully erect coned glory. As for the grizzled skipper - nothing!
Posted by Valley Naturalist at 13:14 No comments: 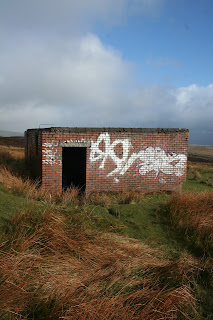 Another early walk around the greater Blaenavon landscape lulled into a false sense of security by a promising weather forecast. The relict red bricked buildings that are a legacy of the open cast operations at Canada Tips are now the canvas for some unregulated community artwork.

I was still hopeful for a passing dotterel but had to be content with four lapwing. There's sure to be a record from some soft-shoe weekender who stumbles across a couple of birds close to a tourist honey pot site this Bank Holiday. The only high point in an otherwise cold bird free morning was another record of fir clubmoss from the bed of a long breached industrial waterbody. 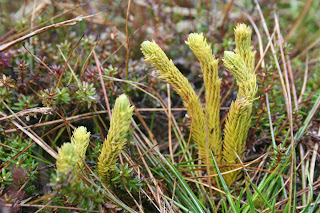 Posted by Valley Naturalist at 11:17 No comments: