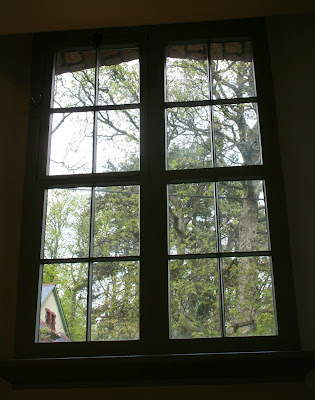 As an obsessive biological recorder I'm always keen to collect more data. Be it commuting to work, shopping with the domestic goddess or just going about ones business, there's always an opportunity for another record.

Take windows for example, invertebrates have a habit of flying into them often with fatal consequences, the windowsills below can therefore be rich pickings for biological material. I recently flicked through the debris on a windowsill in a community building in Blaenavon. Here I was able to record the following:
Posted by Valley Naturalist at 16:59 No comments:

How brave am I? 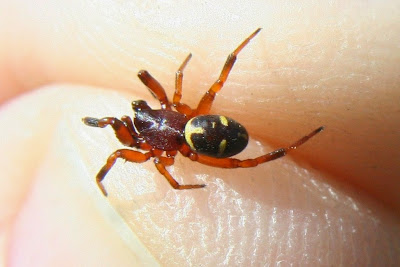 On another failed foray into the Blaenserchan valley to track down the green-winged orchid found by Steve Carter, I happened on this small spider crossing a well worn path among regenerating heathland. Not knowing its name I took several photographs before letting it go about its business. Transpires it's Steatoda phalerata one of the false widow spiders and related to those deadly individuals periodically portrayed by the Daily Mail as 'venomous spiders'.

Seems its been recorded in the vice county before but it depends on which data source you access as to it's frequency.

C is for canal 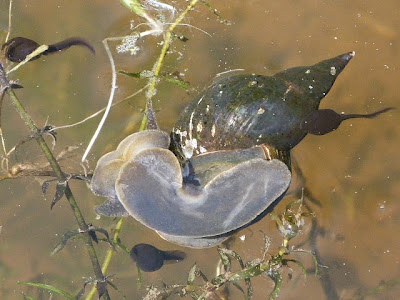 The Monmouthshire and Brecon Canal seems to have escaped the attention of naturalists. Why this should be is as mysterious as the whereabouts of Lord Lucan. A linear chiseled water body vaguely connecting the River Usk Special Area of Conservation, along the margins of the South Wales coalfield, through urban and rural and on to the Brecon Beacons National Park, it joins the dots on the page marked nature conservation sites in Wales in the NRW staff handbook. Birders, botanists, entomologists, freshwater ecologists and the newly branded citizen scientists should be crawling all over it, but alas this doesn't seem the case. Is it that naturalists are as old fashioned as a pipe smoker and that there's not enough to go around? Whatever the reason there's surely a bestseller there for someone who can articulate the romanticism of this feature. 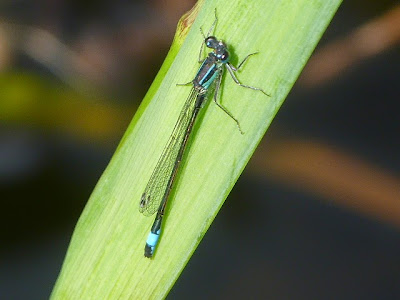 Anyway, last Wednesday I grabbed my chicken sandwiches and stormed out of the office vowing to myself never again to sit in doors on a day that was sunny and promised so much for a red data book naturalist. So I headed for the canal just south of Pontypool for a walk that was little more an 100 metres either way along the towpath.

Although the marginal vegetation was still waiting to burst into flower, the ribbon of greenery supported much to please. The first of the years odonata were on the wing with a number of azure and blue tailed damselflies patrolling. Reed beetles were aplenty along with a number of hoverflies and aquatic molluscs. A very mobile great pond snail moved in consort with several tadpoles and there were many small fishes in the shallows. A gentleman stopped to remove dog mess from his footwear and in doing so took the opportunity to tell me of a basking terrapin further up the canal. And then it was back to attack my inbox with renewed determination to fight the good fight for future generations. 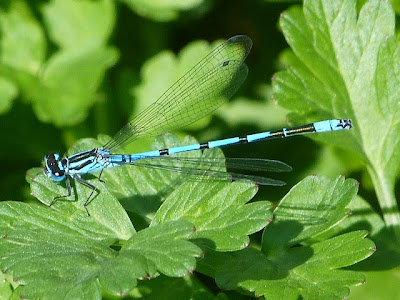 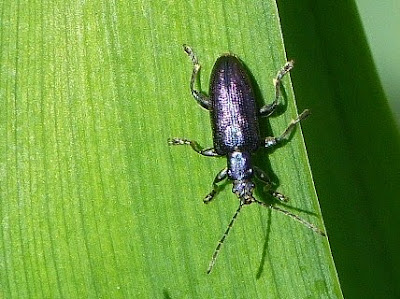 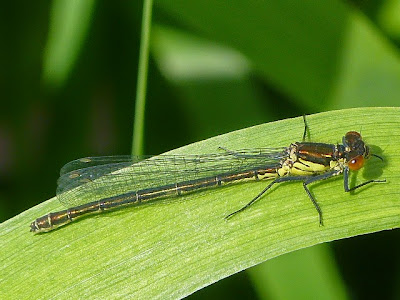 Posted by Valley Naturalist at 09:12 No comments: 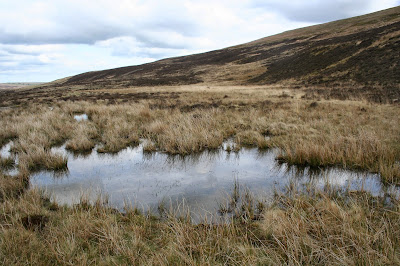 If you haven't read Martin J Haigh's Slope retreat and gullying on revegetated surface mine dumps, Waun Hoscyn, Gwent (1980) published in the Journal of Earth Surface Processes then why not. I made my way to this post Second War land reclamation scheme on the flanks of Mynydd Farteg Fawr south of Blaenavon to look for wildlife in this civil engineered landscape.

I know this area well from the days when I was a fervent nest recorder finding nesting lapwing and snipe on the poorly vegetated coal spoil. Nowadays there's greenery, displacing at least the lapwing to other sites with less biomass. 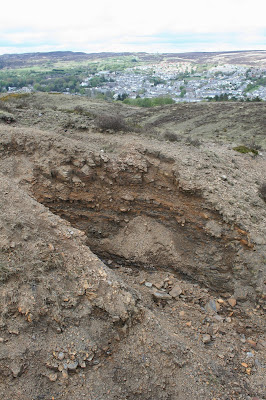 I ambled across a plateau interspersed with shallow ponds and deeply incised gullys. Skylark and meadow pipit were widespread; a female wheatear lingered stubbornly around a watercourse complete with ample nesting sites. A singing male whinchat was located in among a large stand of heather along with a number of active linnet. As I dropped off the plateau into a small well vegetated valley I could hear a reed bunting and to my joy a snipe called repeatedly. The water that runs off this compacted substrate is not free of pollutants the tell tales signs of iron oxide minewater pollution are still evident. On the return back to the car a cuckoo called and was located on a fence post, but as I made a hash of extracting my camera from a tangle of bag straps it took flight and out of range. 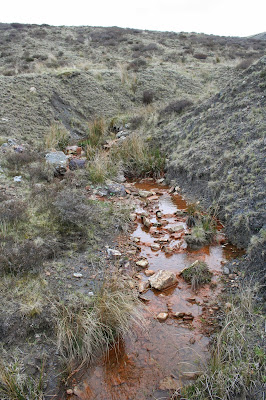 Posted by Valley Naturalist at 19:39 No comments: 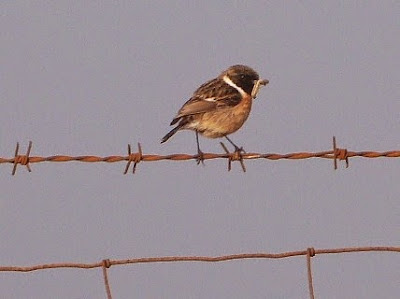 A day late I know, but yesterday was a wash out so I did my bit for International Dawn Chorus Day (IDCD) this morning. A 6.15am start at the railway cutting on the edge of Waunafon Bog was greeted by a man was a greyhound followed quickly by a reeling grasshopper warbler. Into the cutting and the ram-shackled boundary fencing was just the ticket for scolding food carrying stonechat of which there were three pairs along it's length. A distant lapwing called from its breeding site yonder hillside as well as a cuckoo, reed bunting and a number of linnet. Among the stands of molinia was plenty of evidence of fox activity, including feeding areas with abundant bird feathers and patch marking scats. 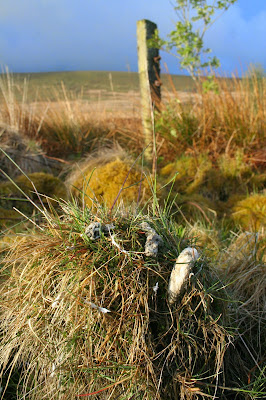 A quick end of walk visit to the conservation lake at Garn Lakes Local Nature Reserve (LNR) turned in a couple of coot, a male tufted duck and a single Canada goose.

Posted by Valley Naturalist at 11:59 No comments: