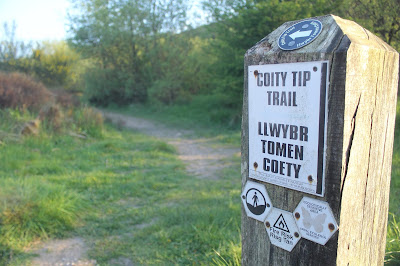 As usual I'm behind with my posts. This rushed communication covers the weekend before last when I made two visits to a couple of colliery spoil sites, once again in the faboulous industrial landscape of Blaenavon. 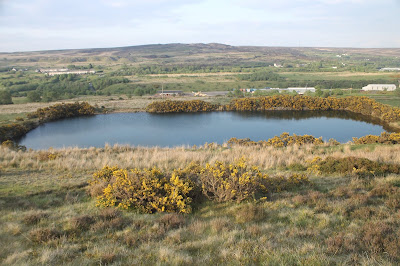 The first excursion was to the Coity Tip area, where I counted at least 111 moonwort growing on the path side around the rear of the tip. At Coity Pond a little grebe called and a coot sat tight on her nest. A pair of stonechat were rather irratated by my presence. A calcareous (tufa) speepage from the lower part of the tip requires a closer examination. This feature offers the chance of a diversity within a generally acidic environment. 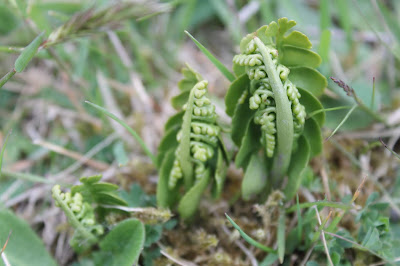 Next day I made my way to Canada Tips and to my surprise I found what seems to be a predated Canada goose nest. Here too was my first dragonfly of the season in the form of a four-spotted chaser. 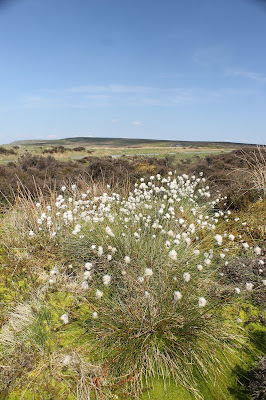 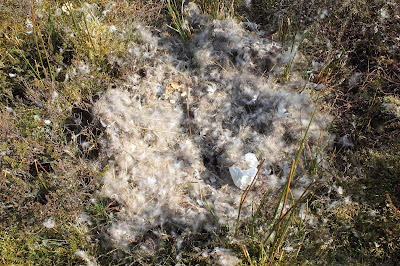 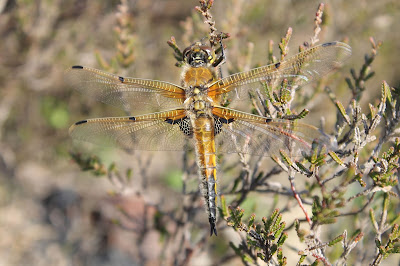 Posted by Valley Naturalist at 19:26 No comments: 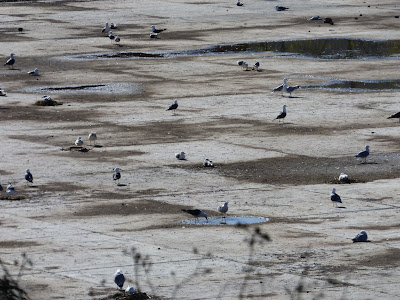 These are scenes from a somewhat chaotic colony of inland breeding gulls at Brynmawr. I've known this colony for at least 10 years and during this period birds have nested on the pitched asbestos roof top of a unit type factory. Following the abandonment of the factory and it's subsequent demolition earlier this year I fully expected the birds to move on. However, and much to my surprise, they have returned and are now nesting at ground level on the concrete foundation of the former building.

I counted at least 30 sitting birds of both herring and lesser black-backed gull, along with a single great blacked-backed. There may have been as many as 200 noisy birds in or around this site with a significant number engaged in courtship posturing or actual mating. During my visit the birds were disturbed by a drilling rig just outside of the perimeter fence suggesting its redevelopment is not too far off. Furthermore at ground level it was clear by the number or corvids present that raising a brood will be something of a challenge for the gulls. 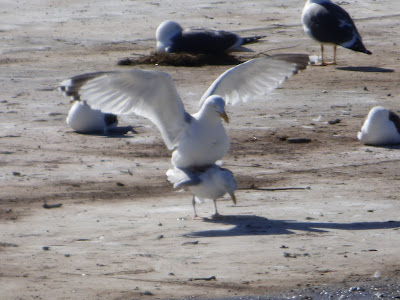 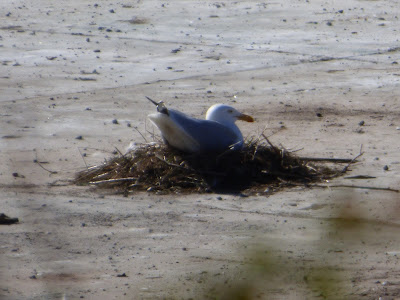 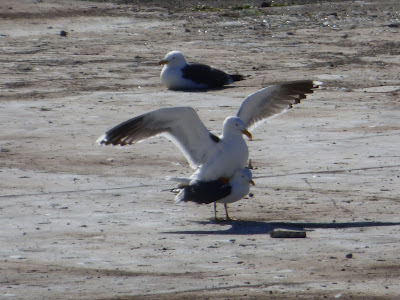 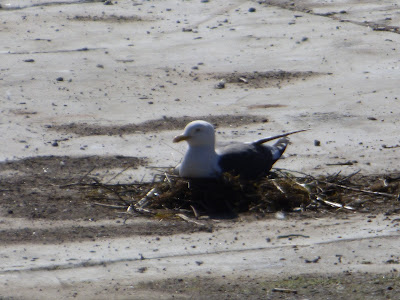 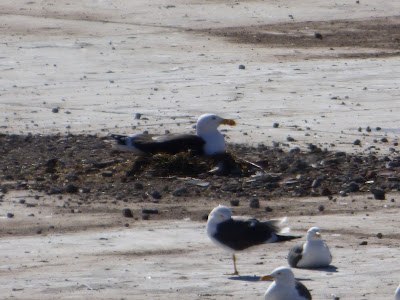 Posted by Valley Naturalist at 07:45 No comments: 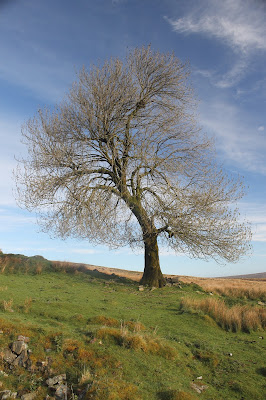 The small parking area at the northern access to Waunafon Bog is temporally reduced to accommodate the heavy machinery and welfare facilities of a nearby civil engineering project. Nonetheless, there is still space and its free! As I pushed my way through a kissing gate and adjoining fence colourfully decorated with a variety of poo bags complete with bulging contents, a peregrine flew north. It was only just past 6am but the noise from the constant traffic of the Brynmawr - Blaenavon road hindered any attempt to detect a reeling grasshopper warbler - or anything else for that matter. 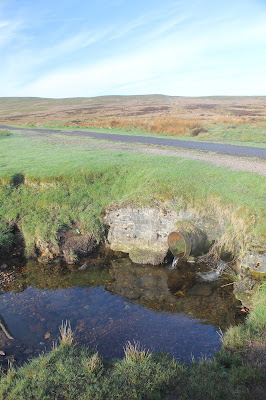 Away from the noise pollution the meadow pipit and skylark were more discernible. A Canada goose called loudly from the bogs vast interior. A steady flow of water was exiting a culvert pipe under the now disused pit road, fed by a deep channel. Its no surprise the bog appears to have a growing expanse of drier areas when unjustified and environmentally damaging water management actions are allowed to continue unchallenged. As I made for a small disused feeder pond I became aware of heavy breathing as the first off road cyclist of the morning pumped his way past without a nod or a wink. The solitary mature ash tree that stands alone on the lower slopes of the Coity marked the location of said pond. Here too are the remnants of historic fly-tipping composing of a large quantity of asbestos sheeting and a pair of white Adidas trainers, but more concerning is the vast bare and deeply incised ffridd slope roadways of scrambler bikes. 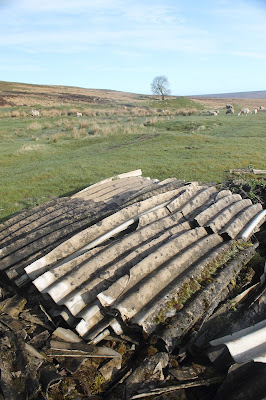 Kicking over an area of developing lichen heath community on a patch of plateaued coal spoil I paused to ponder the prospect of a more forensic examination of the bogs moister areas. I declined.  Before climbing back onto the nicely surfaced redundant pit road I knelled to photograph the showy red tips of cladonia lichens. Now on a mission to return back a couple of calling linnet flew over and then, as if from nowhere, a second cyclist approached from behind. This time I was greeted with a stout, 'morning' as he slowed to strike up a conversation. A nice engaging cyclist, we shared man talk, that focused on camera equipment and posting on line. Interestingly he asked if I posted on the Blaenavon and Beyond Facebook site, the very same question was postulated exactly a week ago by a dog walker on Mynydd y Garn-fawr. Therefore is this site the leading authority on all things Blaenavon, I ask? 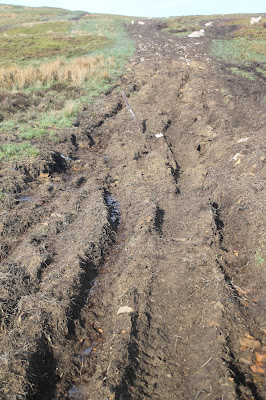 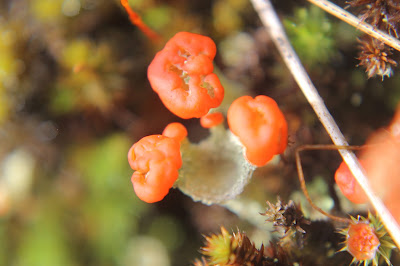 Posted by Valley Naturalist at 08:08 No comments: 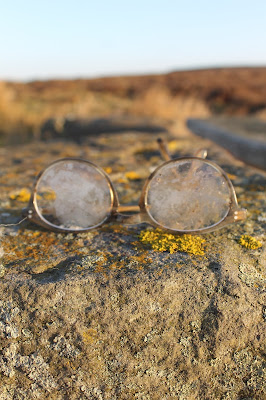 Another early morning start, this time to Mynydd y Garn -fawr east of Blaenavon. According to the South East Wales Biodiversity Records Centre (SEWBReC) this section of the wider Blorenge Site of Special Scientific Interest (SSSI) is very much under - recorded. Parking at Capel Newydd a nearby roadside sycamore has become a shrine to the passing of local people. From this part of Torfaen I made my way towards the Monmouthshire potion of Mynydd y Garn-fawr. A roadside bench was marked by a lost pair of reading glasses. A cuckoo and several redstart sang from the scattered trees of the nearby enclosed farmland. Once on to the upland habitat a small valley caught my eye with various wetland features from running water to wet flushes. One such flush contain a large patch of  fountain apple - moss (Philonotis fontana) and a female reed bunting.

After falling into a hidden stream and receiving a wet foot and lower leg I made for a stand of heather and promptly put up a red grouse. Walking through this habitat was hard work but after awhile I located a well used footpath and made my way back. A male wheatear was very obliging perched on top of a small conifer. The roadside electric cable supported a male stonechat and a number of vocal siskin flew around the nearby forestry plantation. 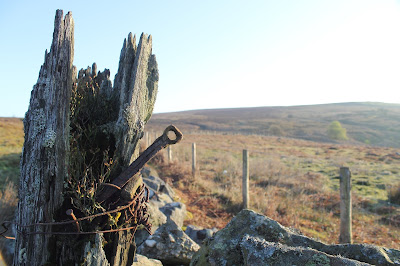 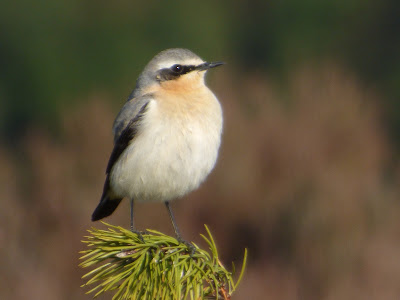 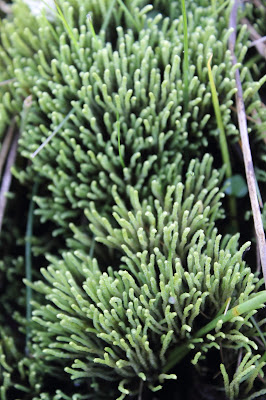 Posted by Valley Naturalist at 19:54 No comments:

Weeds are wildflowers too! 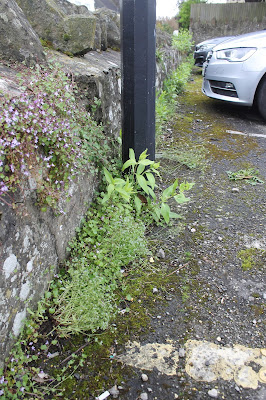 Now you may consider that I've lost the plot, but on a weekend when the aisles of garden centres and DIY centres will be doing a brisk trade in gun shape packaged weedkiller (Resolva) you will forgive me for not revealing the location of this urban weed -fest. That said at some stage I expect this small car park to be sprayed by the council or over zealous community spirited individuals.

This site is an example of how the hard features of the urban grey infrastructure can be softened by relaxing the old fashioned intolerance many have for pioneering wildflowers or weeds. As rough back of envelope count produced 14 plant species as well as a very active hairy-footed flower bee (Anthophora plumipes).


Posted by Valley Naturalist at 07:30 No comments: