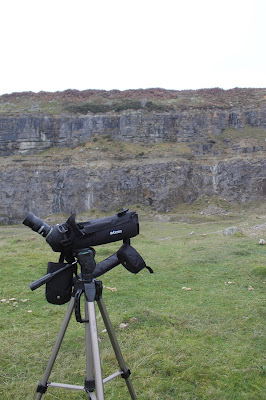 I'm amazed how some birders are able to respond almost immediately to a shout of a rare bird. Have I made a big mistake in the organisation of my life when I say that work and family commitments prevent me from making the same priority? That said the appearance of the rufous-tailed rock thrush on my (greater) patch needed a visit despite a somewhat elderly yearning for more pipe and slippers time. I knew that if I didn't make the eight mile or so round journey to Gilwern Hill last Sunday morning my chance of seeing this once in a lifetime occurrence will have passed, probably to my regret when drafting my Natural History of the Eastern Valley or Memoirs of a Valley Naturalist in later life - they say there's at least one book in everyone! 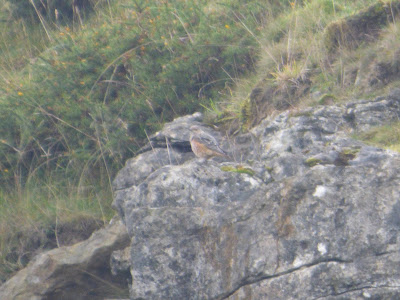 Come 6am on Sunday I was between a rock (thrush) and a hard place. I was embroiled in a tug of love between getting out of bed and vacating that warm duvet environment or driving in semi darkness to a foggy, chilly, Welsh mountainside to search for a bird in the craggy, limestone post-industrial wilderness. To my credit the latter prevailed.

I gave myself a metaphorical pat on the back for loading the car with cameras, scope, walking boots etc. the night before as this allowed me a quick cup of tea before leaving. No need to stir the wrath of family and neighbours by crashing around looking for kit at a time when most sensible people are still in bed. 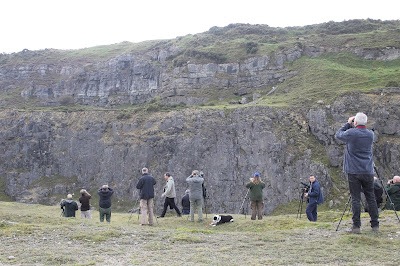 On the Cwmavon Road I gently swerved through instinct to avoid several grey squirrel before arriving in semi-darkness at Gilwern Hill. To my surprise there were already around a dozen vehicles on site including a camper van. Most cars were empty of their occupants another was in the process of being vacated by birders with a clear Essex dialect. Striking up a conversation I discovered they had started out at 3.30am. Of the 50 or so birders around the site that morning I met people from Cardiff, Stoke, Leeds and Birmingham.

The first quarry was where most attendees has set up camp, scopes in position and binoculars employed to scan the grassy tussocks between the grey quarry face. We then waited and waited and waited and I wandered and wandered and wandered. Steve Smith turned up to help break the boredom. After nearly three hours of nothingness, just the watching of birders drifting past, I started the trek home resigned to not seeing the bird, when a birder silhouetted against the sky and with mobile phone in hand shouted  'its in the third quarry'. Around the bend and in view of the third quarry I could see a gathering forming with a trail of others rushing to join. I did an about turn. Out of breath I eventually arrived at the chosen spot, set up and quickly located the bird, proud and visible, preening happily. After a while it dropped down out of sight enabling a pause in the regular background noise of the clicking of motorised cameras. At this point I decided to leave satisfied that all the effort had proved fruitful.

Back at the car the parking had become crictial. Cars were parked in a broken line either side of the road as far as the Lamb and Fox pub. A Police car passed but didn't stop. I heard later that one birders vehicle has got stuck in a ditch. I'm not surpised. 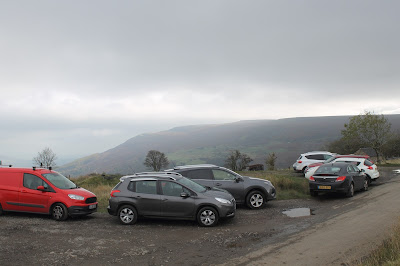 Posted by Valley Naturalist at 08:09 No comments: Links to this post