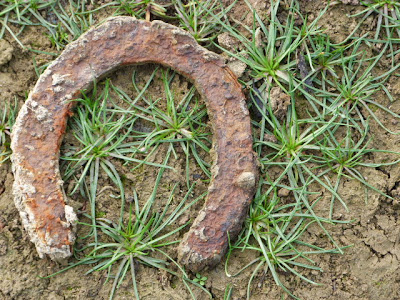 Lady luck wasn't with me at Llandegfedd Reservoir as there were no passage waders, no passage terns, no passage passerines (or very few anyway)﻿ in fact not much of anything at all. Vis mig was restricted to a small number of skylark. Botanically shoreweed was still visible on the muddy shoreline of Green Pool bay.

A mid afternoon visit to Tredegar House Lake was a little more variable but similarly dry. Moderate numbers of common wildfowl from coot to moorhen and mallard, with a smattering of cormorant, heron and six little grebe. A swallow was still visiting the nest site in the boat house and black headed gull numbers were over sixty, but without a Med gull or ringed bird in sight.
Posted by Valley Naturalist at 10:27 No comments:

A by-product of the smelting process 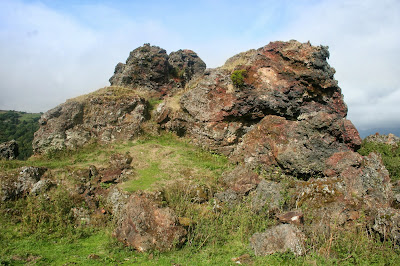 A late posting from the weekend. Garnddyrys just of the Blorenge is a well known landmark for its large fused blocks of iron smelting slag. A red kite drifted overhead before disappearing into the mist of the Blorenge. A stonechat called from the nearby heather clad slopes and good numbers of meadow pipit were augmented by a party of around 30 goldfinch. 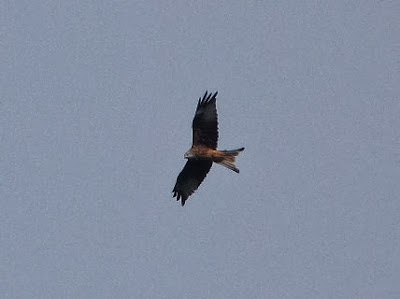 At Dunlop Semtex Pond the first four winter wigeon were on show but the pond was dominanted by a site busting count of 82 Canada goose. Also present were small numbers of moorhen, coot, tufted duck, mute swan and great created grebe.
Posted by Valley Naturalist at 19:03 No comments: 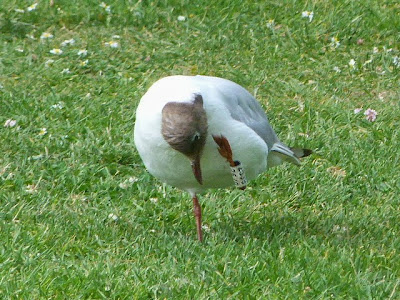 Some of you may remember the colour ringed black headed gull in the July 16th posting. Having got around to reporting the bird via the Cotswold Water Park ringing project I've now recieved a response. Thanks to Tim Ball for the swift turnaround of information. Details as follows:

Its seems well etablished that many southern England black headed gulls move in a westerly direction after breeding. It is interesting that just five days after my sighting this bird was in southern Ireland.
Posted by Valley Naturalist at 18:01 No comments: 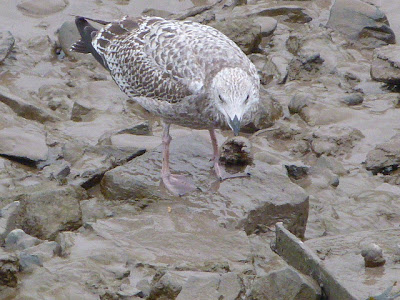 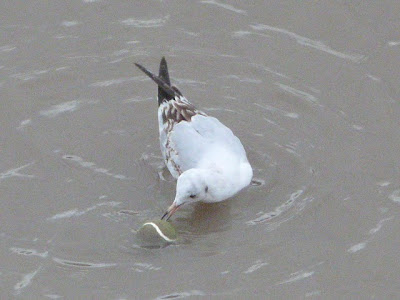 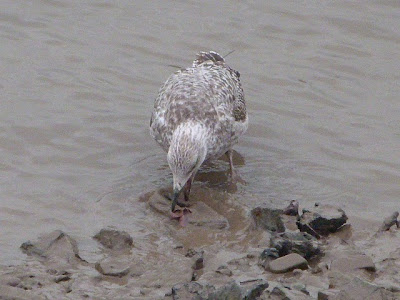 
'Give them something to do' is often the response of the general public to instances of anti-social behaviour amongst the youth. The assumption being that if youngsters are free from boredom they'll be less inclined to drink under age and go snogging in parks. The same could be said of those other urban anti-socials, the gulls. A spate of ice cream pinching and dustbin raiding is enough to tie up the resources of the local Wildlife Crime Officer for months. In an effort to keep gulls occupied and away from jumping on parked cars in supermarkets residents throughout Gwent are being encouraged to throw all unwanted small items into the River Usk Special Area of Conservation (SAC). The idea is that these then become exposed at low tide and washed back up on the incoming tide offering gulls endless hours of boredom busting fun. Early indications from a pilot study in Newport suggest reported cases of dive bombing gulls are down. Mrs Jones of Seagull View has greeted this news with cautious optimism, she said. 'These birds were landing on my chimney pot and calling loudly, things got so bad we had to install CCTV and go ex- directory, Dai at number 19 was even considering vigilante action. But the 'Give it to the Gulls initiative does seem to be working'. These sentiments were echoed by Mr.Bright a local lighting engineer who had seen a corresponding reduction in gulls hanging about on roadside lighting columns and swooping to take morsels of food ejected by legitimate road users.
Posted by Valley Naturalist at 12:39 1 comment:

This is a rare sight indeed 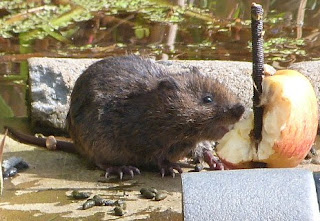 Happened to drop into Magor Marsh today and was lucky enough to photograph a water vole taking advantage of an apple on one of the feeding platforms. Gwent Wildlife Trust has an on-going reintroduction programme at this site. Lets hope its successful.
Posted by Valley Naturalist at 19:47 No comments:

A sense of neglect 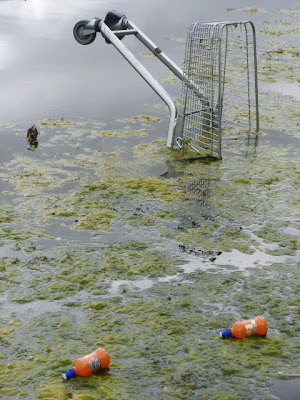 Dunlop Semtex Pond in Brynmawr has taken a turn for the worst. Once a pond servicing the thirst of heavy industry this redundant natural resource was included in a comprehensive regeneration scheme that saw  a mix of residential and retail properties, freshly branded as 'Lakeside'. The pond itself was sold to a local angling organisation and public monies were used to improve access primarily for fishing. Since this brave new world the pond has steadily developed an air of neglect. Waterside fences have been damaged and not replaced, access to ramps and fishing platforms are barred to all other users by padlocked gates (similar to Wentwood Reservoir) and its also accumulating that characteristic eclectic mix of urban detritus. Furthermore there's an issue with algal blooms. The surface is now over half covered by algae that seems somewhat unique to this site. I suspect this is directly related to the daily input of detergent from a nearby business exacerbated by the ill judged introduction of defecating domestic fowl. These birds are mainly sedentary choosing to spend most of their time preening in or adjacent to the main water inlet, where organic material is flushed into the pond.


I'm sure the reasons behind this neglect are complex so I wouldn't wish to be too critcal. My issue is with the regulatory bodies and funding organisations who appear to think that the future well being of these sites are best placed with fishing interests as if they are the only player in town. Welsh Water embraces angling like a lifelong friend often to the exclusion of other legitimate users. Wentwood Reservoir is like Fort Knox accessible only to fisherman with no hint of multifuctionality here! Angling is a predominately male dominated past time but with numbers particapating falling annually it surely is time for plan B, where the interests of the majority are preferred to the interests of the few. 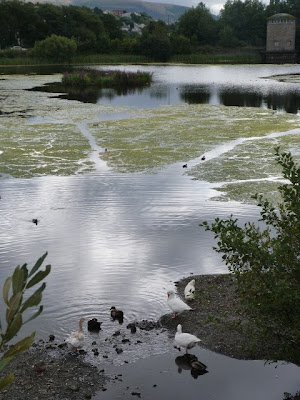 Posted by Valley Naturalist at 09:31 6 comments: 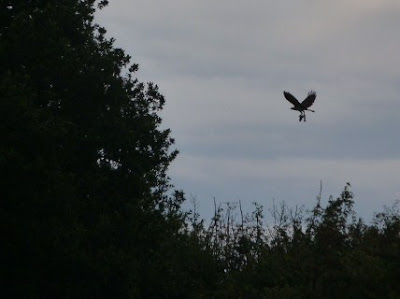 Its been a good few years since I last saw an osprey at Llandegfedd Reservoir. A quick morning visit with the specific objective of seeing a bird that's been present for the last couple of days didn't disappoint. As soon as I arrived to my chosen vantage point on the The Island the bird quickly appeared complete with fish, flying over Green Pool Bay then alighting in a tree just out of sight. Other birds of note included a single little egret, three tufted duck and 19 teal.

At Penyfan Pond this afternoon were singles of cormorant and tufted duck. Away from the pond was a spotted flycatcher that utilised some fencing for feeding along with a nearby redstart. 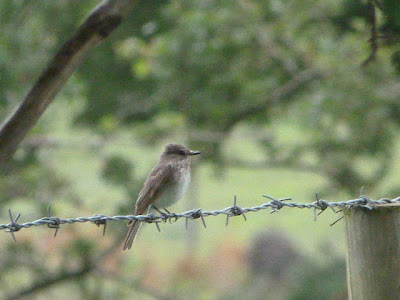 We were clubbing it 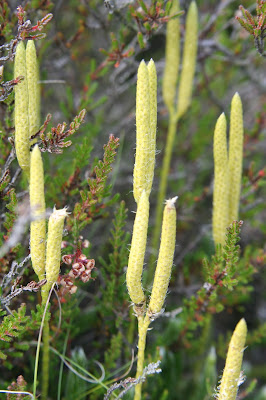 Today I spent a very enjoyable time with Mike Kilner. Although Mike's speciality is spiders he was keen to do some clubmoss twitching. First up was stags horn clubmoss and it was just as well Mike was with me. Whilst I was thrashed about aimlessly in leggy heather Mike dropped on the clubmoss relatively easily. And what a sight it was hundreds of fruiting bodies proud and erect.

Next up was fir clubmoss this required a walk to the top of Canada tips to find a specimen growing in the base of a disused reservoir. Once again Mike was able to locate the clubmoss after my poor attempt at findng it. 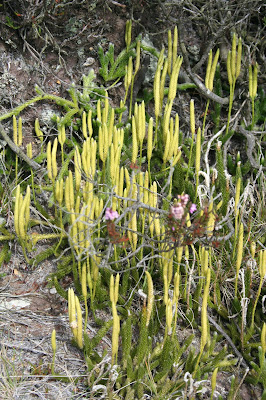 Posted by Valley Naturalist at 20:33 No comments: 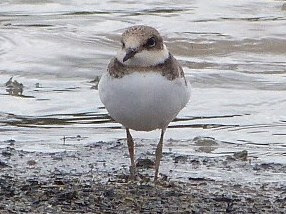 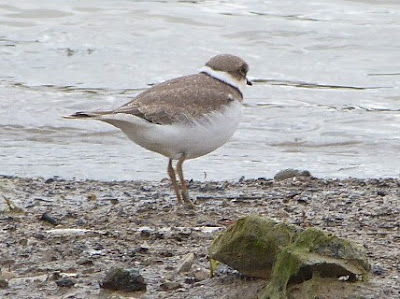 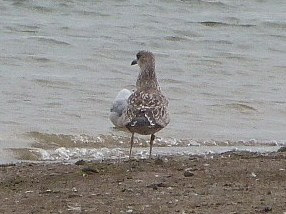 Yesterday afternoon at Llandegfedd Reservoir was good for ringed birds if nothing else. A ring on a little ringed plover was hardly noticeable whilst my first ever tibia ringed gull was briefly visible before the bird took flight. Otherwise a Cetti's warbler gave a short burst of song from the inlet bay whilst wildfowl got on the scoreboard with seven wigeon, nine teal and a single tufted duck.
Posted by Valley Naturalist at 07:38 No comments: 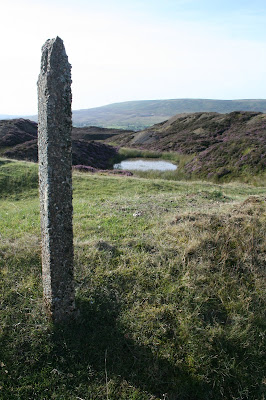 A late posting from 1st September reports on my jolly around the bings of Blaenavon. What are bings I hear you say? Bings are Scottish for spoil tips or slag heaps. These features are ideal for all wannabe naturalists, variable in aspect, chemical composition and age they are the prefect resource for the study of vegetational succession. Bare ground, lichen heath, acid grassland its all to be found on this unintentional exercise in habitat creation by our industrial forefathers. Its a paradox that not too long ago this landscape was vilified as unkempt and derelict now enlightenment has championed its abundant natural history. And with the continued loss of similar sites across south Wales Blaenavon is set to become an island of bing biological diversity amongst the stealth of urban development. 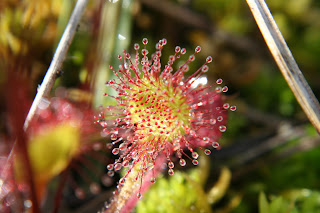 It was notable as the first coat wearing session of the autumn. Birds were a tad thin on the ground a wheatear broke the duck followed by a family party of stonechat. As the temperatures improved the grayling butterflies started to appear with up to half a dozen on a sunny warm south facing bing supported by an odd small tortoiseshell. Where the spoil gives way to more traditional upland habitat round leaved sundew could still be found in flower amongst the sphagnum. On return the sun was now doing its stuff and to my surprise a late green tiger beetle alighted close to foot.
Posted by Valley Naturalist at 07:22 No comments:

Its that gull thing again 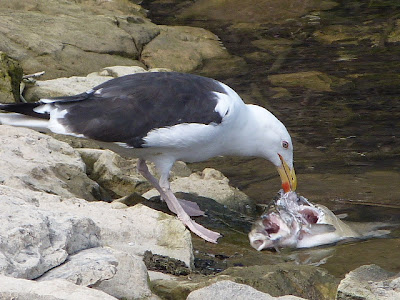 Nowadays its rare not to record a great black backed gull from Llandegfedd Reservoir. Even through the spring and summer months there's always at least one bird present. This pair was close in at the dam today attracted by a dead fish. 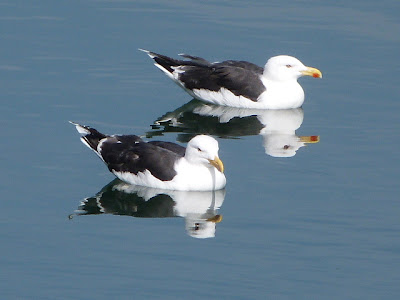 Posted by Valley Naturalist at 20:27 No comments: 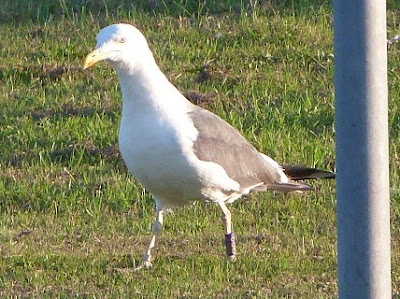 This evening my beady eye caught sight of this colour ringed lesser black backed gull feeding on the roundabout opposite Newport's waste transfer station. Despite a detour to park up for a closer view of the bird and attached ring this individual failed to oblige hence a crop of poor quality images. There's some suggestion it has bred locally as at one point an immature bird was seen to spend time with this adult seemingly begging for food.
Posted by Valley Naturalist at 20:52 No comments: