Snowy and the sniffing dogs 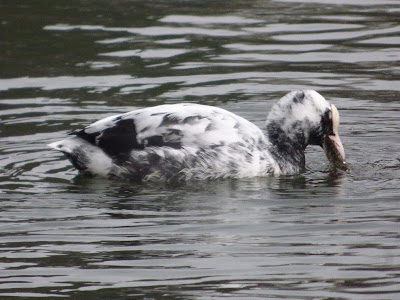 Tredegar House Lake supported a healthy flock of around 250 mainly black-headed gull. It took a while but I eventually landed on a adult Mediterranean gull shortly before a member of the public asked me if 'all those white things were ducks'?


On the roof of the boat house there was a steady exchange of loafing birds. The Dutch ringed black-headed gull was prominent along with the German white colour ringed bird. This is the third consecutive winter this bird has been noted at the lake.. At this point it seemed that every uncontrolled dog appeared keen to sniff around my feet thereby flushing everything nearby. Then, briefly, a bird carrying a green Darvic ring alighted. This was subsequently pinned down as a Norwegian bird. 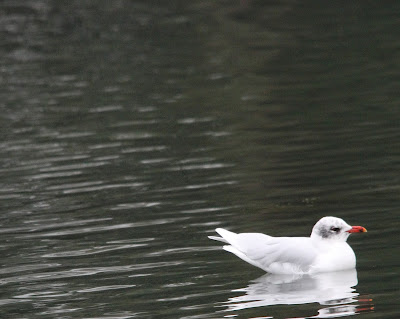 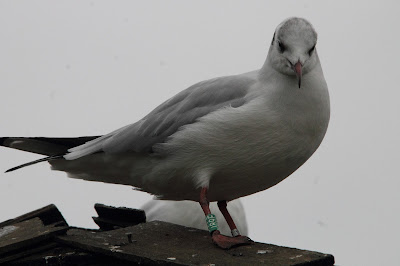 Elsewhere on the lake Snowy the leucistic coot appears to be holding territory. Three cormorant where feeding and the number of tufted duck was up to 23.

Posted by Valley Naturalist at 19:49 No comments:

New years day is traditionally the day when active birders get stuck in to their new list. For me its new years eve that's historically my day out. Having developed a taste for urban birding it was Tredegar House Lake and River Usk in Newport Town Centre that were the initial venues on my list.

Having neglected Tredegar House over recent months I decided this would be my first stop off. Naturally, being the end of year holiday period the site was very popular, especially for dog walkers. It seemed that those without a dog in tow were the exception. Throwing and retrieving the ball from the lake was very popular and another couple had some type of automatic ball launcher that looked like a gun and sounded like an air rifle.

The lake supported a healthy population of black-headed gull one of which carried a Dutch ring. Previously this site was good for Mediterranean Gull but scanning the flock none were present. What was evident though was the changing head plumage of the black-headed gulls. Several were now starting to obtain their summer head plumage. Other notables on the lake were nine little grebe and six tufted duck. I moved on.

Along the Riverfront in Newport Town Centre I was greeted by a long line black-headed gull standing expectantly on the promenade railings. None were carriyng rings. Disappointingly the number of larger gulls were very low. But a scan of those present revealed the long standing adult yellow-legged gull.. This bird eventually left headed northwards.


Leaving Newport Town Centre I wanted to check the flooded field that has been present on the River Usk floodplain just south of Caerleon for a number of years. On the way my eye caught sight of a large flock of c250 black-headed gull feeding on the waterlogged playing fields at St Julians. I made a quick detour to track down this flock of gulls parking close to Newport bowls club. Due to more dog walkers the birds were frequently disturbed but they alighted long enough to pick out an adult Mediterranean gull. Satisfied there was nothing more to see, I returned to my car to check the flooded field at Caerleon on my wat home.

As the Caerleon field is not accessible the only known way of viewing it is from the St Julians road and then scoping through the vegetation. Amongst the smattering of birds were c100 lapwing, 2 wigeon, c20 Teal, 3 shovelar, a common gull and an adult yellow-legged gull.


Posted by Valley Naturalist at 08:45 No comments: