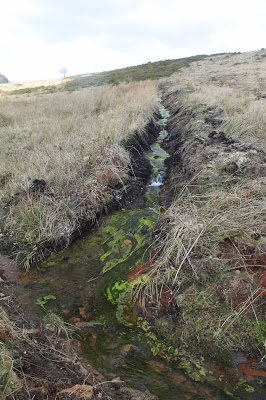 It seems the old farmers favourite of land drainage is alive and kicking in the south Wales valleys. The idea that holding water in the landscape for as long as possible to help buffer the impacts of increased rainfall on the lower river catchment appears lost on some old school land managers. A channel cut through the water absorbing, sphagnum topped, layer of peat is working depressingly efficiently. I can only guess the aim of this work is to agriculturally 'improve' this part of the 'ffridd' landscape. And to cap it all its liberated a nice cocktail of mine water pollutants. 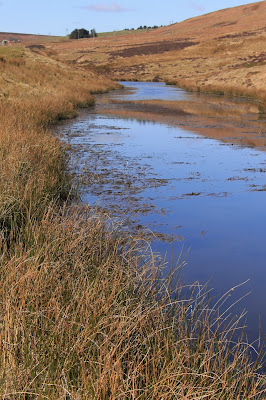 Elsewhere a walk around the lower slopes of Mynydd Farteg Fawr was notable for this nice linear water body that on this visit supported a 'drop in' swallow - my first of the year. This pond is a relatively new feature, probably formed as a result of a blocked culvert. If the aforementioned water drainage busy bodies get the bit between their teeth its long term prognosis is not good. However, we need more actions in the uplands that seek to retain water for as long as possible instead of the shortsighted actions of the few! 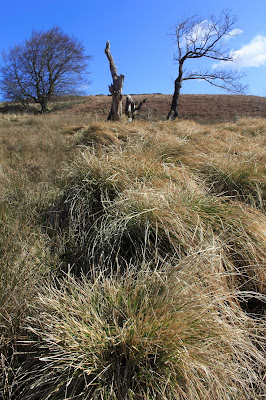 From the pond I made my way to an area of remnant dry stone walling looking for an early male wheatear. The walling is restricted to three smallest compartments that once formed the immediate surroundings of a lost farmstead called Yew Tree Farm, One assumed, logically, it was called such due to the presence of a yew tree. There was no sign of a living tree but a large dead stump now with a rowan sapling hitching a ride is testament to what would have been a long lived specimen. 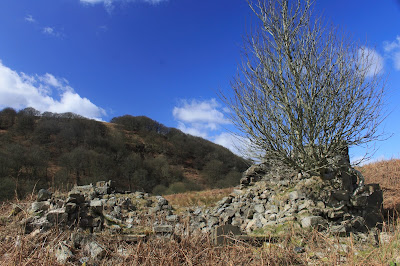 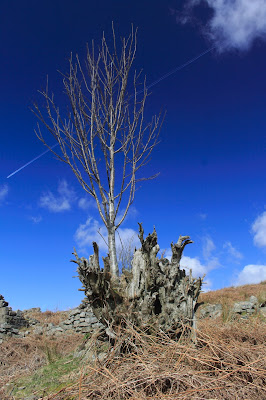 Posted by Valley Naturalist at 20:45 4 comments: 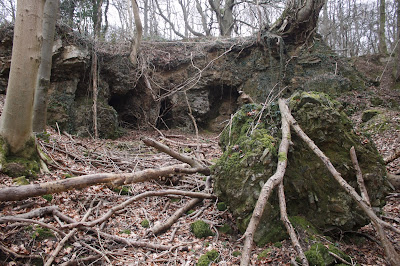 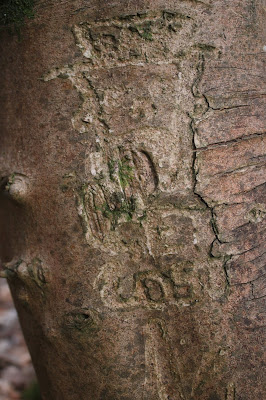 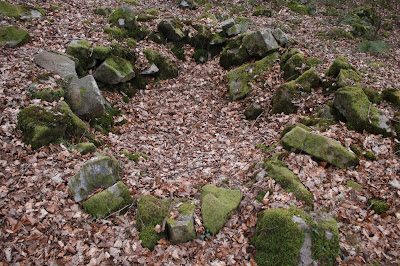 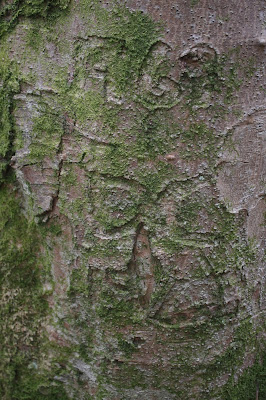 I happened on an interesting website recently, www.ukeconet.org showcases the social history of woodlands through projects such as Tree Stories and Industrial Woodlands. This prompted me to have another ramble through the Lasgarn Wood, near Abersychan. Perched on a ridge of carboniferous limestone this woodland is full of industrial archaeology along with tree cravings of a more contemporary nature. Shallow mine workings sit close to a remnant dram line that was once used to transport limestone across the valley to The British Ironworks. Associated with these workings are other features such as drystone walling and a curious circular stone pit.

I've documented tree carvings in the woodlands around my home before. Some of the inscriptions are found way off the beaten track in unexpected locations. Few are beyond that of peoples initials but some have attempted to be a little more creative. The one above carved into a tree close to an abandoned mine working appears to depict a small hat wearing character with the associated word, lost.! Close by was another inscription that clearly marks the year as 1963. Not an earth shattering discovery I would grant, but for me this illustrates the role woodlands once played as a venue for recreation in the south Wales former mining communities. The disappointing aspect of all is that no one seems very bothered about cataloging these tree markings for posterity.
Posted by Valley Naturalist at 19:57 No comments: 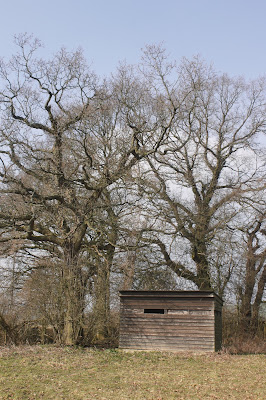 Once again it's that time of year when Welsh Water flings open its doors to all and sundry. Gone are the cold war years when birders were barred from Llandegfedd Reservoir - unless you coughed up for a permit from this not for profit company that is. The cost of which increased year on year without any apparent justification. Nonetheless the spirit of glasnost has now arrived in rural Monmouthshire and its open access again.

There remains a vestige of pre-privatistion times when sincere attempts were made to accommodate those interested in the natural sciences, A sturdy hide positioned on the fringe of the woodland core on the island overlooks Green Pool and once commanded good views to the east. Now an iron curtain of impregnable willow scrub prevents any meaningful view, so its now high 'n' dry, without friends to embrace its functionality as a look out post. Today its only use, judging by the cover of underfoot detritus, is as a sheep shed. This structure, so much a part of the social history of birding in Gwent could be useful again, brought back into service but only if the trees that blight the margins of this part of the reservoir are managed appropriately. Little wonder the once formidable flocks of grazing wigeon are just a memory, they simply can't access sufficient grassland! This posting relates to Sunday 13th March when the first sunshine of the spring stirred the cockles of the heart of an aging, yet grumpy, naturalist. A momentary distraction from bootlace adjustments, I looked skywards as ten scolding fieldfare were a reminder that winter has yet to give up the ghost. The two small ponds dug for the purposes of environmental education are now a remnant of more progressive times but they still harboured frogs spawn and a number of active caddis fly cases. From the little I know about these fisherman's friends, species can sometimes be separated by the material selected for case construction. The upper image shows a caddis that's chosen a covering of freshwater limpet that's somewhat reminiscent of the Victorian shell grotto era. 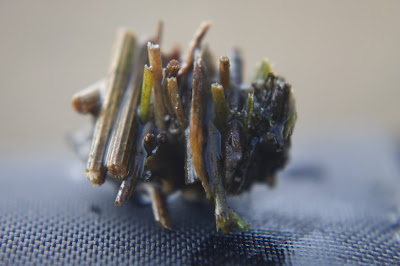 The sunshine did its best to promote a decent show of early season flowering plants. Primrose, and wild daffodil could be found with the more numerous lesser celendine. It was the celendine that seems to attract what could be found of invertebrate activity. According to my copy of Steven Falk's Field Guide to Bees of Great Britain and Ireland (2015) the small mining bee pictured below has affinities to Wilke's mining bee (Andrena wilkella). 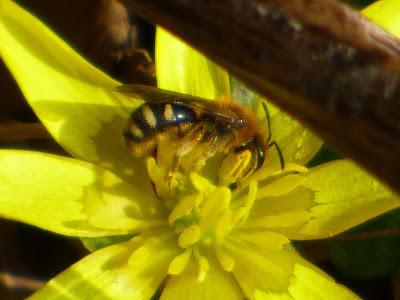 Posted by Valley Naturalist at 20:13 No comments:

Renegades of the edgelands 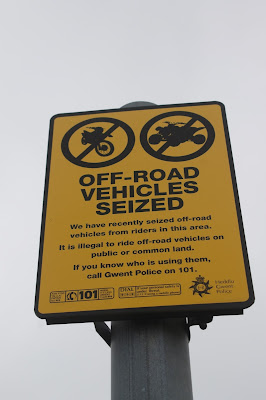 Diverted from gull watching by car parking restrictions and road closures in Newport I returned to the valleys for some peace and tranquility, seeking refuse in the peri-urban environment of Blaenavon.

A pair of in flight calling Canada geese alerted me to a couple of wild water swimmers in Keepers Pond. But it was not long before my efforts at escapism and some breathing space was thwarted by the loudening approach of a posse of quad bikers. And so it was to be, a couple of hours outdoors was remarkable not for the recording of the first summer migrant but for the amount of off road activity - they were ubiquitous! Total group counts were as follows:-

Three quad bikers passed at speed but were respectful in sharing the time of day. However, within a few minutes I was surprised to come across them again. On this occasion they were tending to a break down to one of the bikes, As I approached an inquiry was made as to whether I had a screw to fix a puncture. I responded negatively, wondering if I looked like the type of person that carried a DIY kit on a walk in the countryside, nonetheless this was promptly followed by a supplementary question. 'Wha' you after'? I quipped  I was a naturalist. There was an instant deafening silence as the three hapless mud covered bike riders stood motionless mentally computing my response. Within a few seconds I was around the toe of a nearby coal tip and out of sight, far enough away to avoid the need to explain that a naturalist isn't a person that takes his/her clothes off in public! 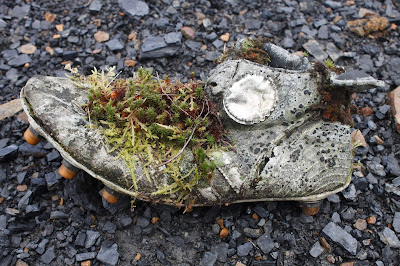 This set the tone for my outing. Bikers appeared with depressing regularity often emerging on top of a tip pausing to rev their machines menacingly whilst pondering their next move, and with the sun rising behind them reminiscent of a scene from the Planet of the Apes. These renegades of the edgelands are  free spirits who ride the landscape with impunity, sticking a metaphorical two fingers up to those wishing to prevent them. Illegal it is, controllable it isn't!

Away from the roller-coaster micro landscape that is Canada Tips, bikers race along linear desire lines in the macro landscape that on quieter days are populated  by only sheep, skylarks and the occasional walker accompanied by the ever present brisk breeze. Here speed and peat are the fun ingredients. If you're unfortunate to be facing the on coming bike traffic you're obliged to give way and step aside, doff your cap and say good day sir, for to do otherwise risks injury. 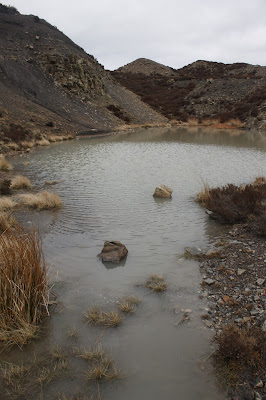 Okay there maybe some beneficial ecological spin offs resulting from this type of habitat disturbance as it helps reset the successional clock. However, this is repeated uncontrolled damage on a grand scale that's replicated throughout the valleys and the authorities are powerless to prevent it.

Posted by Valley Naturalist at 20:07 No comments:

Unable to Finnish off! 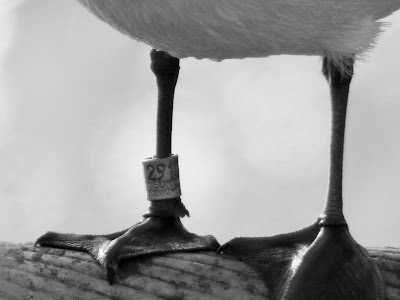 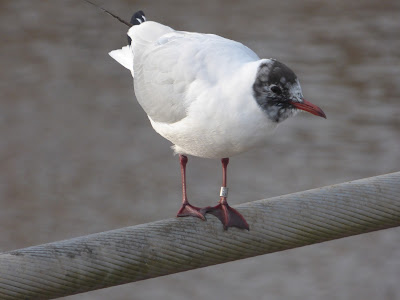 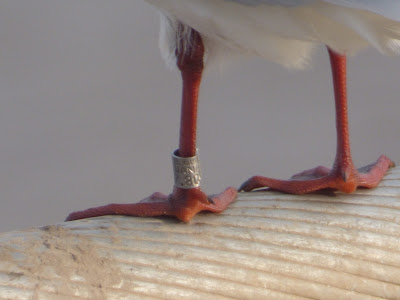 I didn't go far beyond the Millenium Bridge in Newport's town centre last weekend as many of the riverfront's gulls were loafing on the bridges straining wires. These obliging birds made good for easy ring reading, First up was one of the long staying Lithuanian black-headed gulls. This bird that's been present for several months now, was very confiding. Conversely another ringed bird proved more of a challenge. Frustratingly I was able to determine a Finnish ring but was unable to get enough of a view to read the full number. I'm hoping the bird will still be around next week but with the breeding season fast approaching and a pending movement back north eastward I'm not holding my breath.

Posted by Valley Naturalist at 06:57 No comments: