Not from Denny Island it seems 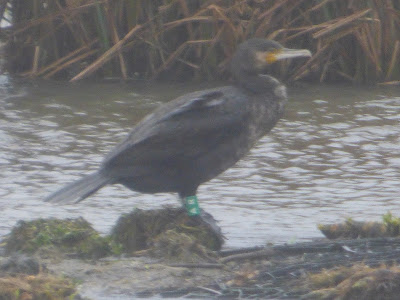 Stuck in the middle of the Severn Estuary, Denny Island is the overseas territory of Gwent. Famed for its cormorant colony, breeding rock pipit and a few other bits and pieces this is the outcrop that veteran naturalist Colin Titcombe attempted to walk to at low tide. His book Gwent: its landscape and natural history (1998) recalls the resultant adventure. The cormorant colony was also the subject of an annual colour ringing pilgrimage by members of the Goldcliff Ringing Group. It was therefore reasonable to assume that the colourfully ringed bird loafing on the floating island at Dunlop Semtex Pond, Brynmawr  last weekend was the product of such a mission. Not so it seems! After some research and correspondence the bird (Green AR) in the above image was tracked down to the Dutch ringing programme. Although I still await specific details its been confirmed it was ringed at Oostvaardersplaseen in the Ijsselneer area. 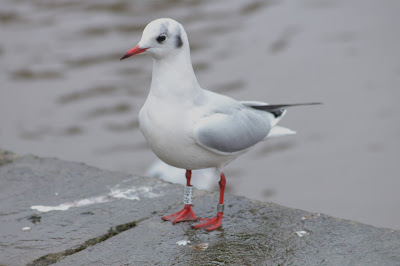 I've also received other recovery news over the last week for a couple of black-headed gulls. Firstly white AF460 that's been around Tredegar House for most of this winter was confirmed as a German bird. Summary of its history is as follows: 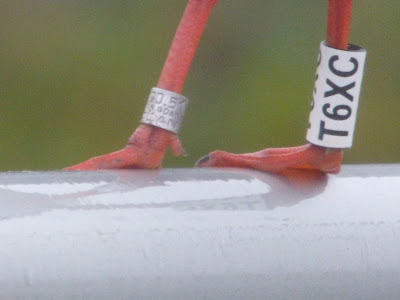 Secondly the bird that showed well on the urban frontage of the River Usk, Newport early December 2015 was, as suspected, a Polish bird ringed as a pullus at Zachodniopomorskie on 8th June 2012. 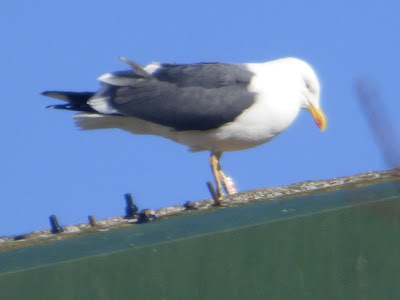 Finally I've not had a colour ringed lesser black- backed gull for a couple of years, so this one, white 7WH, on the rooftop around Asda, Brynmawr was a welcome change. Details coming some.


Posted by Valley Naturalist at 07:10 No comments: 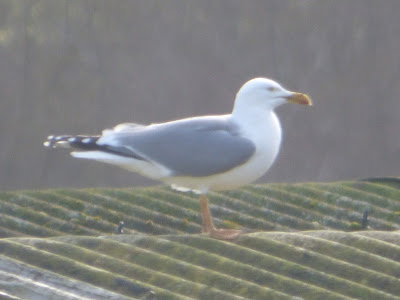 Whilst contemplating the destination of my usual Sunday morning excursion I had a recollection that around this time in previous years, gulls, mainly herring, were starting to congregate on their breeding site on the roof tops around Asda Brynmawr. And so it proved to be up to 60 birds were present on the undulating asbestos roofed redundant industrial building. My main objective was to check for colour ringed birds but on scanning the legs of herring gulls one stood out as not being pink. 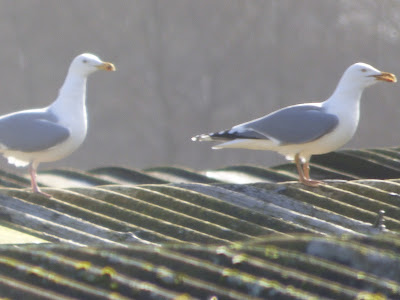 This was my first yellow-legged gull in the north of the county and followed the Iceland gull found on the same building last February. The above photo illustrates some of the contrasting features between the yellow-legged and herring. Note the yellow legs, darker mantle, and bulkier head and neck form.


Posted by Valley Naturalist at 19:02 No comments: 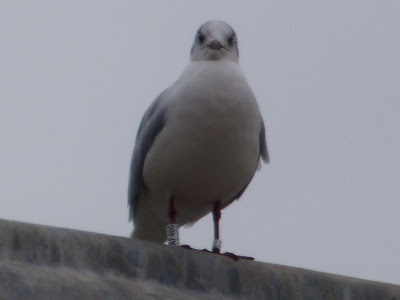 I recently reported the sightings of three colour ringed black-headed gulls to their respective schemes - two Polish and one German. A prompt same day response from Rafal Sandecki regarding white TTW2 (see blog posting  17 October 2015 ) confirmed that it was ringed as a chick on 8th June 2015 in Culianian - Pomeranian Province on an island in Lake Kusowo, Poland.


Meanwhile the bird carrying white AF460 that's been frequenting the environs of Tredegar House since December last year can still be found often amongst the line of birds on the roof top of said building. A brief sighing of another bird with a colour ring covered in mud proved frustrating.
Posted by Valley Naturalist at 06:42 No comments: