A symbol of Welshness 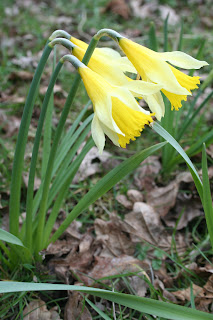 The wild daffodil is a celebrated symbol of Wales and was once commonplace in rural Gwent. Sadly they now take a bit of tracking down. The woods and hedgerows around Llandegfedd Reservoir have always been one of the better spots to find them. These plants brightened up a rather dull and unremarkable birding visit to this fallen beast of a birding hotspot. The two singing chiffchaff completed the long awaited springtime ambiance.
Posted by Valley Naturalist at 17:16 No comments: Links to this post 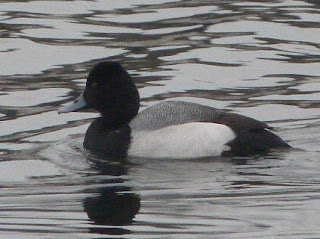 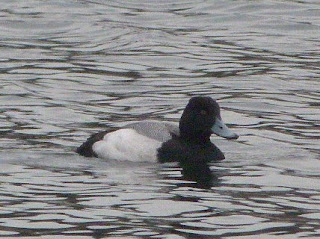 Although just a handful of active birders in Gwent they same to do well in the rare bird finding stakes. The lesser scaup at Bryn Bach Park yesterday evening was showing well in failing light.﻿
﻿
﻿
Posted by Valley Naturalist at 08:08 No comments: Links to this post 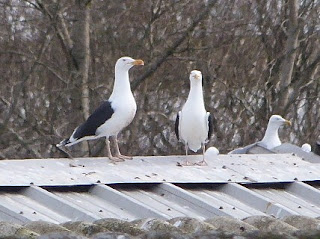 The gulls are back with a vengeance on the roof tops around ASDA in Brynmwar. A quick peep Sunday afternoon turned in a count busting total of c150 herring and lesser black-backed gulls. To my surprise in amongst the noisy throng was a couple of great black backs. Although I wasn't able to give the group a good going over for colour rings, one lesser black-backed was detected, but alas I was unable to read the ring. However it could well be the return of blue CHL from its wintering quarters in Spain.

By the way the ASDA killjoys have introduced anti-bird wires to the tops of the car park lamp posts - we wouldn't want bird poo on shoppers cars now would we! 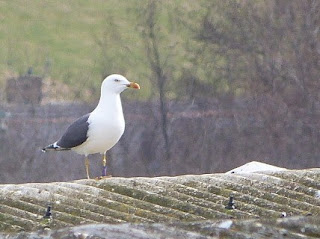 Through a haze of marijuana smoke 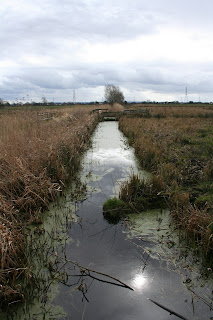 A skater boy complete with board had secured himself a vantage point on top on the hide at Magor Marsh. Unperturbed  by my arrival he continued to smoke a heady mix of 'weed' for the duration of my stay. A nearby Cetti's warbler gave an energy laden burst of loud intoxicated song and a distant reed bunting was also in 'this is my territory mode'. On the lake a male shoveler starred, ably supported by a couple of gadwall, a single teal and the ubiquitous Canada goose. 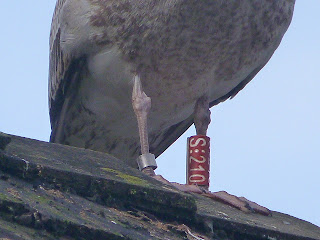 At Tredegar House Lake gulls once again featured with the Boathouse roof rapidly becoming a Mecca for ring reading enthusiasts. This herring gull sported a colour ring combination I had yet to encounter. On the lake 11 tufted duck were punucated by at least 15 coot. 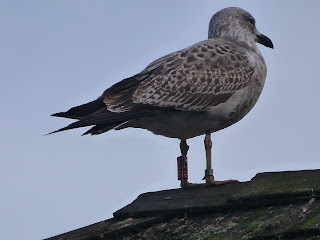 Posted by Valley Naturalist at 17:49 No comments: Links to this post 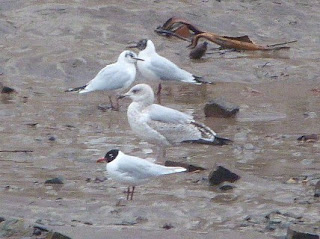 A nice summer plumage Mediterranean gull was the star of a short walk up stream of the River Usk from the M4 crossing at Newport. Also four snipe, two redshank and a great black backed gull. 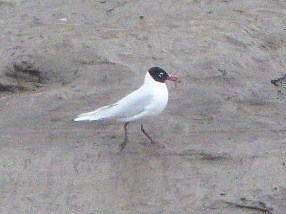 Posted by Valley Naturalist at 19:11 No comments: Links to this post 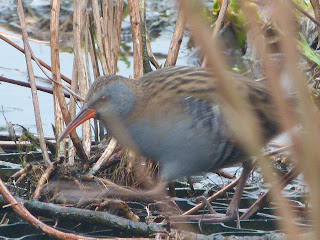 The introduction of a number of floating islands and the softening up with vegetation of the margins of Cwmbran Boating Lake has certainly increased the variety of birds using the site. Today this very confiding water rail was openly feeding on an island that had drifted free of its centre lake position coming to rest on the shoreline. The bird was comfortably feeding in the open as joggers and young mums pushing their off spring passed close by.
Posted by Valley Naturalist at 17:28 No comments: Links to this post 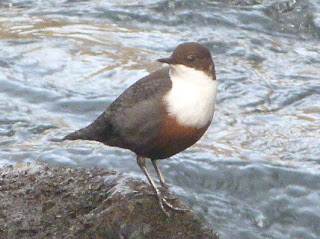 After a rather sobering identification malfunction - more of which I intend to talk about in a future posting - I got back in the saddle with Mars bar break to Cwmbran Boating Lake. The spring like weather had provoked some birds to sing namely goldcrest and this dipper that was giving it some on the adjacent Afon Lwyd. 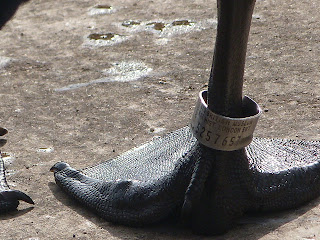 The boating lake itself was very well populated with waterbirds. 28 Canada goose with one carrying a Llangorse Lake ring, 50+ mallard, 4 coot, 4 moorhen, 2 herring gull, a single common gull and 75+ black headed gull many of which were loafing about on the floating islands However there was no sign of the water rail that was present late last week. One of the black headed gulls was showing the tell tale signs of being processed by a human(s) with a nice white colour ring. Unfortunately my camera delivers a rather pixelated image when extended to its maximum focal length so I was unable to read the number. 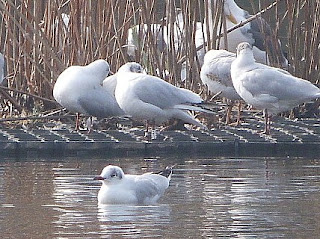 ﻿
Posted by Valley Naturalist at 08:26 No comments: Links to this post