With water levels exceptionally low now is a good time explore to those hard reach river side areas. Urban rivers can be rich pickings for naturalists with an often eclectic mix of native and not so native wildlife. With this in mind I called into a nice accessible spot on the Afon Llwyd at Ponthir. A wide pebbly margin was ripe for stone turning producing good numbers of ground beetles including Elaphrus cupreus. Plant life included the now omnipresent invasives of Japanese knotweed and Himalayan balsam. Here too were good stands of pendulous sedge and a some wood-club rush a plant somewhat surprisingly on the 2017 Monmouthshire Rare Plant Register. Also frequent were remote sedge and hairy brome. Other plants include figwort (with mullein moth caterpillar), water chickweed, lesser spearwort and brooklime.


Posted by Valley Naturalist at 08:09 No comments: 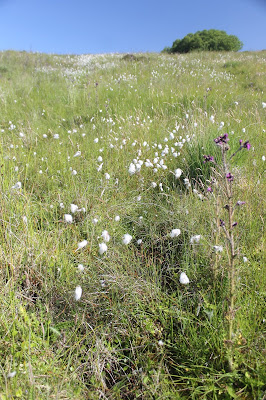 It's more than a week since I ventured to the Varteg for my annual visit to the reclaimed landscape of The Balance. A makeshift hand written sign attached to a field gate advised dog owners to keep them on leads due to the presence of cattle. And sure enough positioned inconveniently just the other side of a footpath stile were a dozen or so grunting, tail swishing, pat forming cattle taking advantage of the shade provided by a number of mature trees. A quick detour took me beyond the cattle and into an open vista of gorse, bracken and acid grassland, here marbled whites, ringlets and grayling butterflies were in abundance. I could feel the sun burning the back of my neck as I fumbled to photograph one of these busy insects - unsuccessfully! 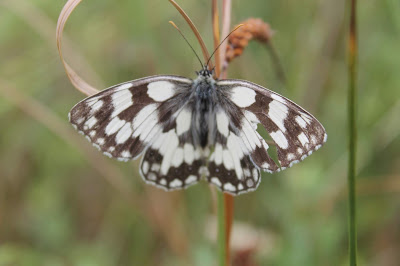 The land form here is characteristic of a 1970's land reclamation scheme. Gone is the randomness of industrial abuse and in is a smooth, ironed out, sheep grazed blandness where you need to work to find nature. However, through the heat and the dust of a sheep track and just like a head scarf draped over the shoulder of a Bedouin tradesman came a green verdant river of vegetation adorned with white nodding heads of scattered common cotton grass. With purpose in my stride I quickly arrived at a substantial spring flush still with running water. Here I was surprised to set a single snipe to flight. Dropping to my knees for a closer examination of the herbage I discovered a mass of ivy-leaved bellflower, bog pimpernel and round-leaved sundew. 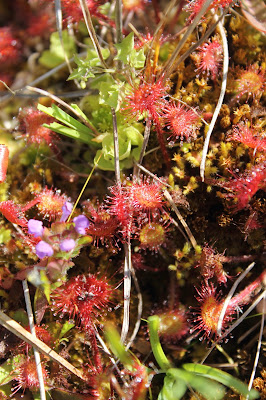 Following the running water to an area of open water, that was clearly characterised by odonata I began to search for these colourful insects. Keeled skimmer were the most numerous, but thrown in for good measure were a golden-ringed dragonfly and a broad bodied chaser. Scarce blue-tailed damselfly move slowly through the stream side herbage. A male yellowhammer sang from the top of a nearby gorse bush. 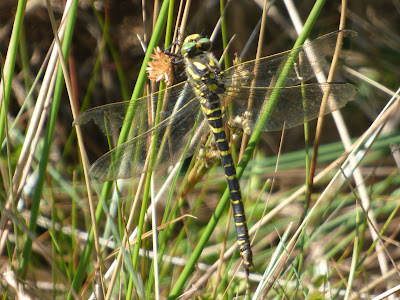 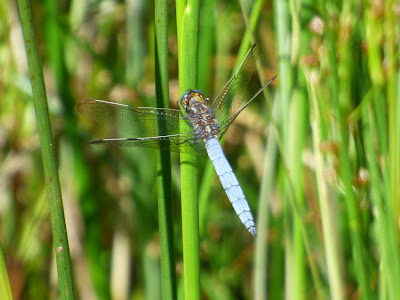 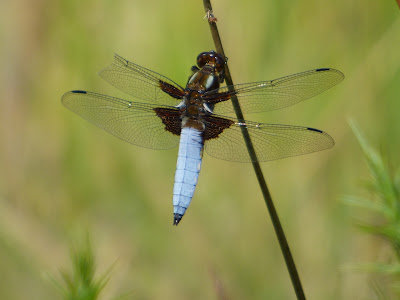 Posted by Valley Naturalist at 21:05 No comments: 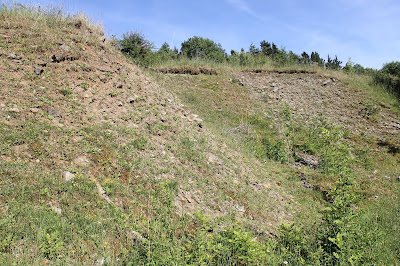 The fossil path was the pet name we gave to a small limestone quarry on the northern edge of the Lasgarn Wood near Abersychan. The spoil tips therein contained a wonderment of shelly limestone from the Carboniferous period, and as kids we made trips to dig the fossils. Today the disused quarry has lost the majority of its calcareous grassland to bracken and scrub, but some patches remain. These contain a variety of fine grasses and other herbage - quaking grass is one notable.

Working my way through the parched remains of a disused reservoir a group of southern marsh orchid were found thriving within the dappled sunlight of an area of willow scrub. Onward through the coolness of an ancient woodland a wood warbler called as I transversed a now dry stream. Beyond the woodland was an area of larch clear-fell now home to thousands of flowering foxglove. I could hear tree pipit and whitethroat. A golden-ringed dragonfly patrolled and a comma butterfly alighted on a bramble thicket. 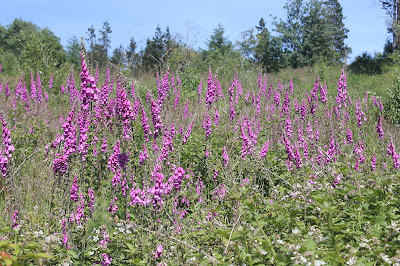 Arriving at the fossil path my mind drifted to a once open landscape of limestone grassland now largely lost to scrub dominated by field rose; a large field maple, unusual for the locality, appeared to be doing well. Some butterflies presented themselves including the first marbled white of the summer. In the heat of the afternoon meadow grasshopper were stridulating. Once a popular recreation area for local people today I meet or saw no one. 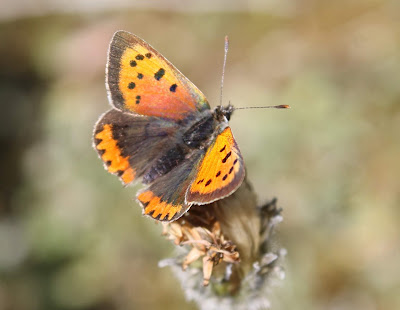 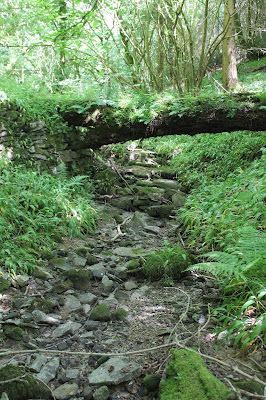 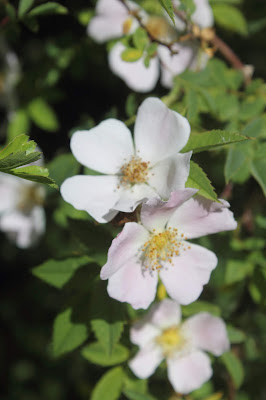 Posted by Valley Naturalist at 08:23 No comments: