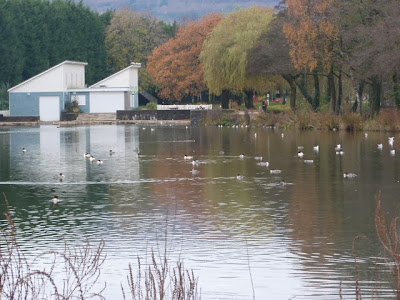 Cwmbran Boating Lake is a small wetland that's always worth a visit. This lunchtime there was a site busting count of 41 goosander along with smaller numbers of other assorted wildfowl and gulls.
Posted by Valley Naturalist at 20:18 No comments: Links to this post 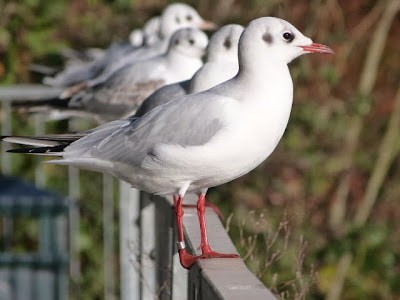 A small party of black headed gull caught my eye when passing through Tintern yesterday. Out of around 20 birds three were carrying rings but despite numerous photos from as many angles a possible I could only get enough to read the sequence on a single BTO ring. Does anyone recognise the origin of EP33914? 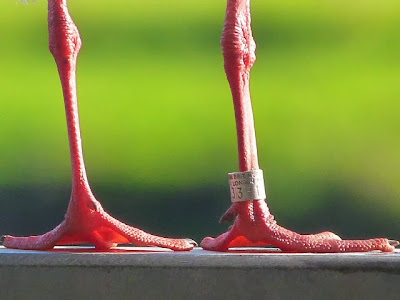 Posted by Valley Naturalist at 17:45 No comments: Links to this post 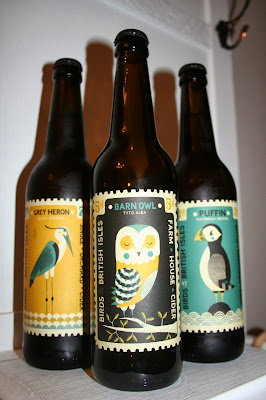 Well not exactly beer but a variety of ciders. Happened on this clutch of attractively labelled gut rot in a home brew shop by the name of Brewers Droop in Bristol. Can't tell you what they tasted like as my wife has drunk them!
Posted by Valley Naturalist at 20:43 No comments: Links to this post 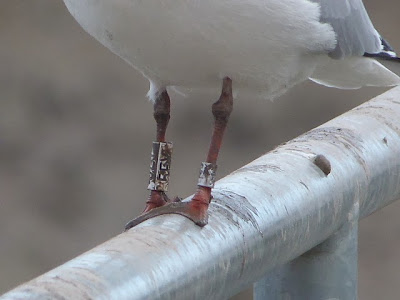 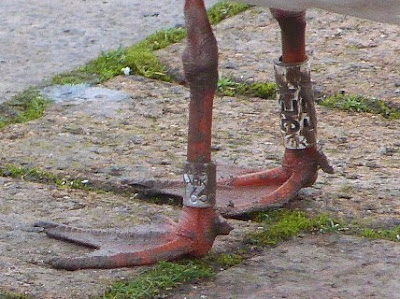 A quick visit to Riverside Newport and the colour ringed redshank is still showing well feeding along the shore line of a rising tide. An elderly gentleman arrived on his bike with a shopping bag full of scraps for the birds, quickly attracting a mass of noisy gulls. In amongst the gathering was this colour ringed black headed gull although sorting out the number was a bit of  a challenge due to a coating of luscious River Usk mud. On closer examination the letters ARK can be seen on the metal suggesting its of Danish origin. The white colour ring is inscribed with the alpha numeric sequence 5EY.  I'll report and wait.
Posted by Valley Naturalist at 09:17 No comments: Links to this post 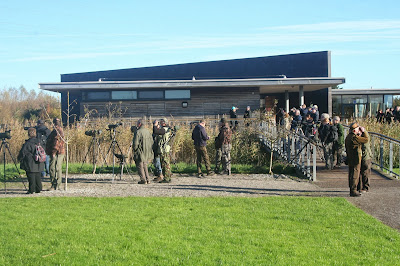 I've never really bought in the whole twitching thing, as rushing around the country looking at ship assisted birds that wouldn't have otherwise found their way to our shores is just fundamentally unsustainable. However I'm sometimes tempted to get involved if its local and the Newport Wetlands penduline tit was just about local enough for me.

On arrival I felt reasonably confident the bird that had performed for three days in a stand of reedmace just outside the visitor centre would once again show well. How I was mistaken! I therefore joined about 100+ birders in a vigil of just hangin' about. After an hour of mind numbing inactivity I came to my senses and left with only a pair of stonechat to trouble the pages of the now infamousValleyNaturalist field note book, but underscored with, 'twitching what's the point'!
Posted by Valley Naturalist at 20:53 No comments: Links to this post 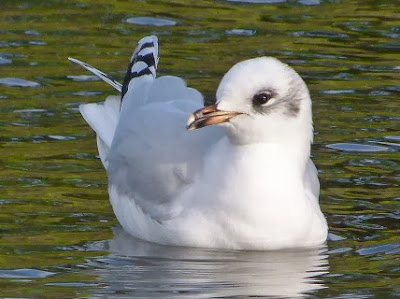 Some people twitch tits I prefer rings - this is of course a reference to the Newport Wetlands penduline tit and my interest in citizen science through the reading of birds carrying rings! Now as a lapsed 'C' permit bird ringer I know how tricky it can sometimes be sorting out a poorly stamped inscription on a little aluminium ring. So imagine the complexities of reading same ring in the field but attached to the leg of a frantic black headed gull drunk on an elixir of water soaked bread. This was just the scenario last Sunday when it seemed that every card carrying National Trust member had descended on Tredegar House Lake with a dog ( usually a water loving Labrador or spaniel ) and a bag of kitchen scraps.

Most, if not all of these well meaning individuals had only one objective and that was feeding a family party of mute swan. But where bread is involved it's always reduced to a raucous feeding frenzy akin to that outside Ali's Kebab Emporium in the wee small hours of a Saturday morning. 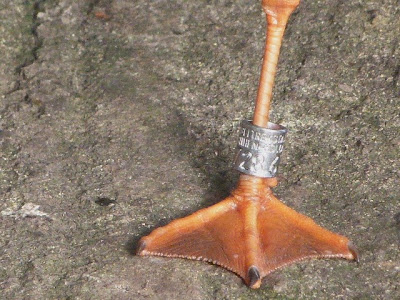 Now part of the ring readers field craft is to keep a keen eye of those wildfowl feeding Sunday strollers, as the resultant gathering of the avian masses is where the rings are. One such gathering of an excited family attracted most of the gulls from around the lake and at least two black headed gulls were carrying those shiny things but with the photographic difficulty factor close to ten on the photographic difficulty factor scale I decided to concentrate on the one that kept alighting on a small boundary wall. Sixty plus images later I felt I had enough to sort out a number.

Later that evening I had secured  a number believed to be from the German ringing scheme. This was subsequently submitted and to my surprise a couple of days later I had a reply from Frank Moors of the Dutch scheme with details of the bird that was ringed in the Summer of 2012 at Griend in Holland. The only drawback was that the information was supplied in Dutch and translation was somewhat painful.

That afternoon at Tredegar Lake there were also at least two Mediterranean Gull, four tufted duck and six little grebe along with singles of cormorant and heron. 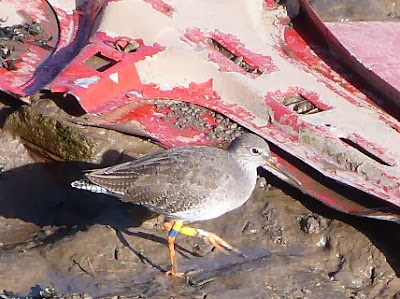 That same day I called in to Riverside, Newport as the tide was out. Amazingly the first bird I set eyes on was the colour ringed redshank first noted almost exactly a year to the day in the same location. The contrast between the response to reporting bird rings to the BTO and that of continental schemes is that one year on I am still waiting for a reply!
Posted by Valley Naturalist at 08:24 No comments: Links to this post

Hunting down the strangler 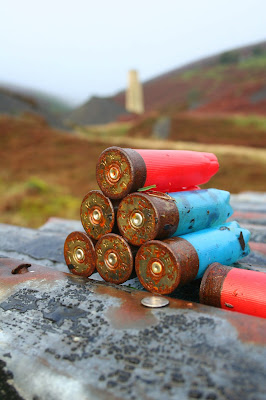 A couple of country bumpkin types told me of the presence of a rare fungi the powder cap strangler (Squamanita paradoxa). This parastic fungi occurs in only one Welsh location and that is the Clydach Gorge. Why this should be is anyone's guess, but it could be that its just under recorded as its preferred habitat of acid grassland is widespread in the valleys. In an half hearted attempt to track it down I stayed local and headed for The British. After good numbers waxcap, coral fungi and the odd dung fungi I called it a day, but not before shooting a few frames of some masculine industrial heritage. 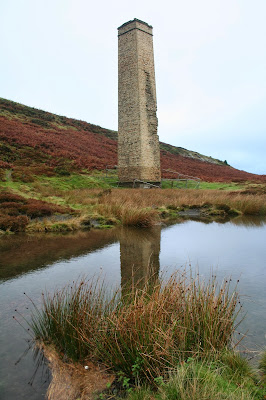 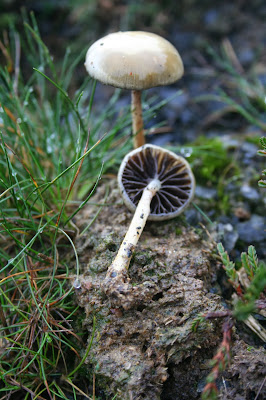 Posted by Valley Naturalist at 19:31 No comments: Links to this post