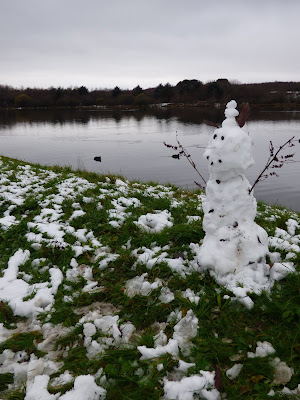 It seemed appropriate that the first significant snowfall of this winter coincided with the appearance of the first bay window Christmas trees in Blaenavon. With a waxwing reported from Weston - super-mare I was hopeful one may turn up on one of the berry laden urban street trees in Brynmawr or Ebbw Vale. Alas this was not the case but the berries were providing a feast for the local thrushes. 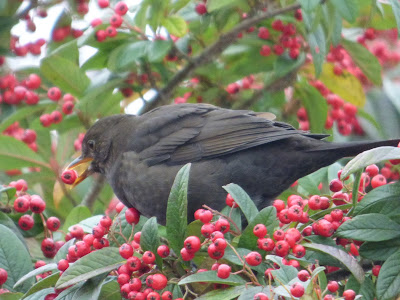 There was not much on Beaufort Ponds except for a single male goosander. Machine Pond was not much better but a pair of stonechat that moved around the adjacent grassland. By contrast Dunlop Semtex Pond was full of wildfowl. To my surprise there were still around 49 wigeon present along with a single female teal. However the most notable was three gadwall - one male, two female. Although I've recorded Gadwall from Beaufort Ponds before this is thought to be the first site record for DSP. 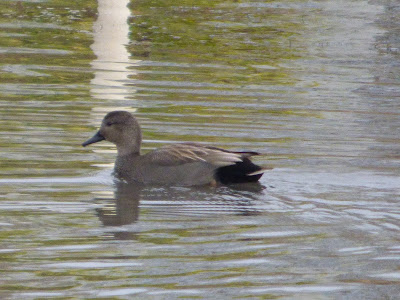 Posted by Valley Naturalist at 20:19 No comments:

Late afternoon at a gull roost 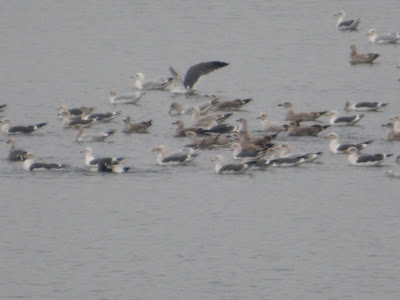 I've noticed the walkers car park at Welsh Water's Sluvad Works had been partly used as a contractors compound of late, so was uncertain if this was still available for Joe Public. As it happened it was so I decided to make my way down hill to the Pettingale hide at Llandegfedd Reservoir to assess the extent of the winter gull roost.

At the hide I was greeted by another example of lack of investment in facilities for birders. Litter was strewn around the inside of the structure and views were restricted due to rampant vegetation, A maturing willow is now obscuring observation to the south and another to the north west. However, there was hardly a breath of wind thereby providing ideal conditions for reservoir watching.

At around 2.30pm a large raft of very vocal Canada goose were being paired off into smaller groups by the actions of dingy sailors. At the same time a group of around 100 mainly lesser black backed gull was forming toward the north of the reservoir. Over the next hour and a half the roost built up to around 3000 birds with many arriving from the south and west. The gathering didn't appear to contain anything that warranted closer scrunity, there was however a single great black backed gull and around 10 common gull.
Posted by Valley Naturalist at 19:33 1 comment: