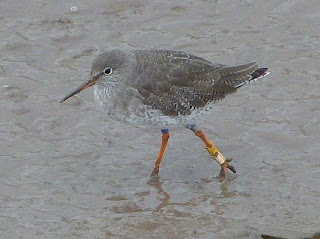 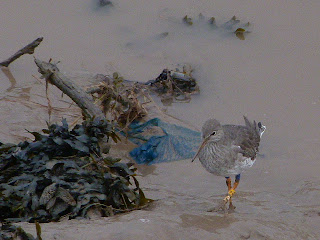 ﻿
Another trip to Newport Riverfront last Sunday with the objective of scattering some bread and attracting some gulls with those lovely colour rings. Despite drawing 50+ black headed gull and small numbers of herring and lesser black backed gulls none were dressed for the occasion. However somewhat crest fallen I returned back to my car but not before one final check of the gulls loafing about on the edge of the receding tide. Amongst which was a single redshank and to my joy its legs were liberally covered in more rings than an Olympic flag - six to be precise. 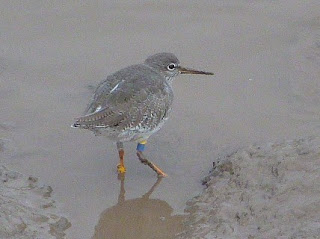 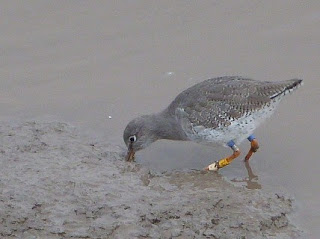 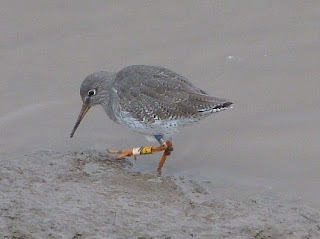 A quick world wide web check suggests this bird was ringed in Sweden, Germany or even Spain as I don't think British ringers attach metal rings above the knee- although I'm sure some clever Dick will put me right if I'm wide of the mark. 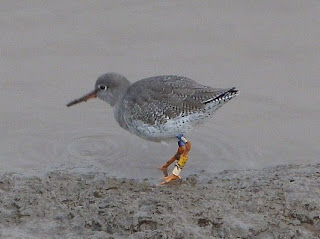 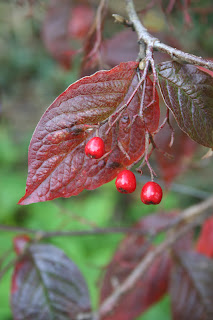 It's a bit like word association or even mind mapping but for me some of the common names of British wildlife have a habit of conjuring up other images, chough is a case in point. Another such obscure childish association is alder buckthorn for some reason the name of this scarce tree reminds me of the 1970s kids game Buckaroo. This as you will probably know is a brightly coloured plastic model based on a gold prospectors pack mule whereby various pieces of mining paraphernalia are gradually attached to the animal until it can take no more and bucks violently to release its burden.

I remember this game from my youth in the days when Christmas day always started with a light covering of snow followed by the excited release of the small items contained within the stocking at the end of my bed. This leg covering was of course one of my fathers old football socks stuffed full of goodies, including a pack of playing cards, a rubber (not the contraceptive type), a diecast matchbox model of a Ford Cortina complete with elevated lead content and assorted fruit and nuts for padding. The main prize however was always downstairs as this was where the fireplace was and therefore the only room accessible to Father Christmas. Amongst the goodies here would be the latest Blue Peter annual with plenty of photographs of the yummy Valarie Singleton, a new Subbuteo team usually the Arsenal away strip, a blue and white bobble hat and scarf, the latest Top of the Pops LP complete with cover photograph of a young scantily clad lady in a yellow crocheted bikini and of course a family game such as Buckaroo, Mousetrap or Monopoly. 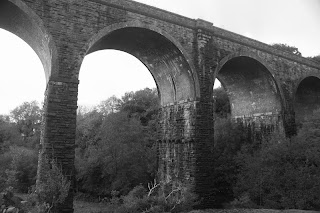 Now I've been thinking, those south valleys industrial heritage concept marketers are surely missing a trick. Just like the plethora of limited edition Monopoly that is available nowadays, how about a local version of Buckaroo? This could take the shape of a forlorn blinkered pit pony in monochrome tones complete with hundredweight (cwt) bags of high carbon content anthracite as its load and instead of bucking with gay abandon the poor animal collapses in a heap when it can take no more. This sounds funny but with the current generation growing up without having the prospect of going down the pit to find work this twisted form of marketing could serve as a handy reminder of the working class exploitation and hardship that was endouered to harvest this black gold and with it the pillage of the landscape - there's a book in this somewhere!

Going back to the real purpose of this entry, as trees go alder buckthorn could be classed as a rarity or infrequent at least as its not a species I encounter often. But last weekend several inviduals were located adjacent to the Garndiffaith viaduct and checking the Flora of Monmouthshire confirmed its patchy existence. Its pleasing at least that the food plant of the brimstone butterfly still has a toe hold in the valleys.
Posted by Valley Naturalist at 11:45 1 comment: 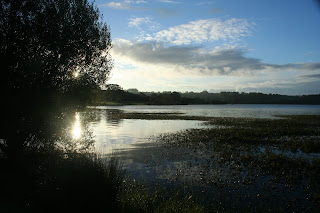 There's something about ticking twitching and me that just doesn't connect. Take last years Garnlydan Reservoir wryneck for example two visits without a sniff, last evenings Pant yr eos Reservoir common scoter, birds had vanished and today the Llandegfedd Reservoir yellow browed warbler was conspicuous by its absence. It  must be something to do with the fact I don't subscribe to rare birds texts, birding world magazine, the UK 400 club or have a note book full of ticks for lifers and megas.

Nonetheless my hour and a half's  tramp around the bramble infested scrub near the Fishermans car park produced some nice activity of the common bird front, including, several redwing, a goldcrest, reed bunting and chiffchaff, fly over redpoll and seed head hopping party of goldfinch. A kingfisher also graced the margins of the reservoir. 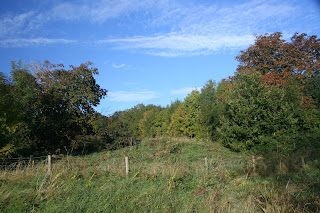 Posted by Valley Naturalist at 13:08 No comments: 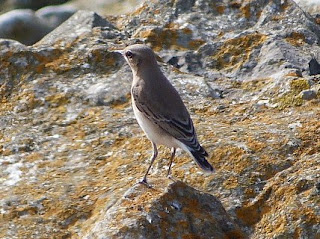 Magor Pill on a falling tide was moderately interesting for common passage birds with four wheatear, the odd chiffchaff, a single male stonechat, 20 + swallow, some meadow pipit, linnet, goldfinch but no yellow browed warbler. Most of the passerines on the foreshore were scattered by a flat cap, green wellie wearing gentleman walking his two golden retrievers. This, in my experience is not unusual as during most of my visits to the coastline around Magor Pill I've encountered individuals walking their dogs through the mud, those who stick to the sea wall and newly labelled Wales Coastal Path rarely have the same disruptive affect. 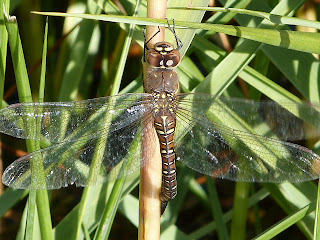 In my last post I speculated as to whether we had seen the last dragonfly day of the year. Obviously from the above pic of an ovipositioning, less migrant more resident migrant hawker, we hadn't. In fact common darter and southern hawker were still widespread. A common groundhopper and Cetti's warbler at Magor Marsh rounded the afternoon off.
Posted by Valley Naturalist at 16:34 No comments: 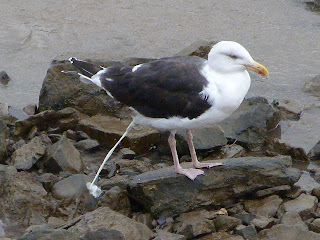 ﻿
Hour to spare yesterday afternoon so decided to try out the newly discovered unofficial gull feeding station along the promenade in Newport, for a spot of ring reading. Tide was low so there were plenty of birds loafing or picking their way through the assortment of muddy tyres, TV sets and hefty tree trunks that are a feature of the River Usk when waters out. 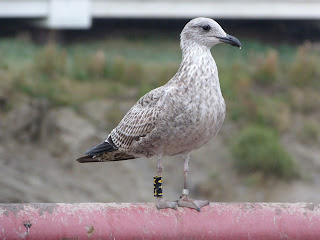 First up was a single great black backed gull doing what comes naturally. At the chosen spot I broke out open some stale bread and soon attracted a scrum of feral pigeon and 30 + black headed gull none of which carried any rings. Larger gulls seemed  more difficult to pull in but eventually several immature lesser black-blacked and a single adult herring gull alighted on the sturdy promenade fencing. One immature lesser black backed gull arrived carrying a black colour ring was yellow lettering. Thankfully I managed a couple of images before the bird was disturbed by a person asking me if I had some spare change - the bird failed to return. 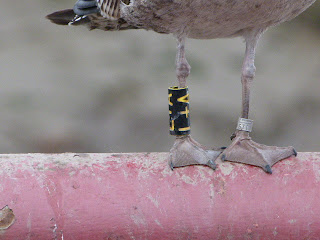 Posted by Valley Naturalist at 16:15 2 comments: