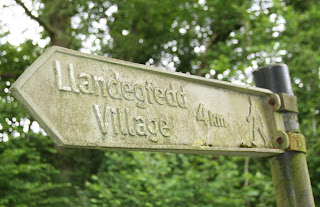 Those well versed in the social history of post war bird watching will know the contribution made by Dr. Bruce Campbell to the development of the BTO and other natural history organisations. Bruce died in January 1993 but left a legacy of a life surrounded by birds and the natural environment. Akin to many of his generation, his knowledge of birds and the countryside was developed through the once common practise of egg collecting and field sports. His book Birdwatcher at Large - Autobiography of an Ornithologist (1979) details some toe curling references to the dispatching of owls and other predators on shooting estates to collecting their eggs, and the frequent killing of all birds including the shooting of a purple sandpiper with a .22 air rifle!!

It would be easy for us to past judgement on these old style naturalists, but for many, in times before good quality field guides and the Internet were available, knowledge was built on finding, killing and collecting. As Bruce matured he applied his undoubted field skills to the cause of nature conservation taking on roles with the BTO and collecting chairmanships and committee roles with the same motivation that drove him to fill a mahogany cabinet of cotton wool and the eggs of British breeding birds.

Before Bruce was able to secure his first conservation role he had a spell working in south Wales as a teacher  whilst at the same time studying for a doctorate. In 1941 he lived at Court Perrot south of Llandegfedd Reservoir in the Sor Brook valley near to Llandegveth Village. His thesis centred on an ambitious plan to complete a breeding bird survey over the farm's whole 250 acres and to compare with a similar plot in a more industrialised part of south Wales near Caerphilly where he had a teaching job. Some of his census work was helped by the Caerphilly School Field Club and I doubt very much there's now a school in Wales with anything approaching an after school field club!

In Chapter 10 of his autobiography entitled Serious Censuses he details his work at Court Perrot Farm. He talks about its habitats and his nest finding techniques of hot and cold searching. During 1942-7 he claimed he got to know Gwent so well that he estimated the total number of breeding species to be around 100 of which 49 had attempted to breed at Court Perrot. His work was eventually published in the Reports and Transactions of the Cardiff Naturalists' Society, vol 81, 1950-2. A table of all breeding birds between 1942-7 is also produced in his book. 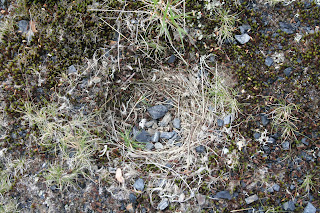 Of the birds he recorded in his study there are some interesting findings. For example grey partridge were more plentiful than pheasant; tree sparrow were present in most years; between 3 and 5 pair of skylark occurred and up to 7 pair of yellowhammer. Other breeding birds of note include turtle dove, yellow wagtail, up to 4 pair of tree pipit and a single lapwing. Interestingly having written up his thesis he came to no earth shattering conclusion, except that industrialisation had impoverished the bird life of the south Wales coalfield. I speculate that should his study be repeated today, with the demise of heavy industry and the intensification of agriculture then results may be different. 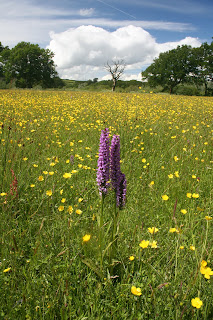 It was Fathers Day and whilst the family gathering were belly laughing over those comedy cards depicting a geek in glasses wearing a knitted Cardigan and another that questioned my tried and tested DIY skills I slipped out the back door unnoticed, destination Llandegfedd Reservoir. Judging by the clutter of vessels on the water it seemed I wasn't the only one to escape another day of expensive greeting card madness - although can't be too mean spirited as amounted cash gifts were easily enough to enable an order to be placed with Book Depository for the newly published Micro Moth Field Guide at an unbelievable price of £13.60, with some left over for an album by those prog rockers The Pineapple Thief! Back to the trip report and you could have been forgiven for mistaking the reservoir for Cowes Regatta with fishermen and sailors 'hither and tither' matched by Canada goose and cormorant 'hither and tither' the only respite for birds thinking about shedding the odd primary were the reservoir's extremities. 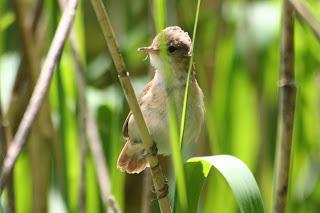 As you know the meadows around this watery playground are good for some naturalist type 'poking around'. The orchid show was in matinee mode with common butterflies starting to perform, common blue, large white, meadow brown, large skipper and small copper, augmented by numerous burnet companion and silver y moths. Reed warblers were still vocal and the number of great crested grebe loafing outside Green Pool hide was into double figures. I returned home and no one was any the wiser for my absence. 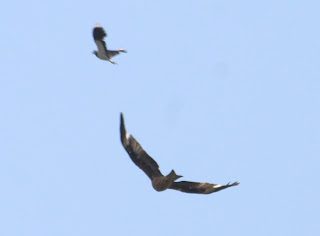 Earlier a red kite was shown the red card by an irrate lapwing. 'Twas only after down loading the pics did I notice the bird was wing tagged - any ideas as to its origin? 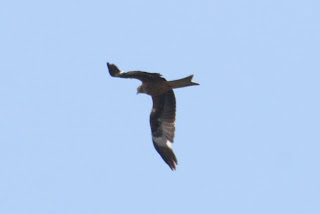 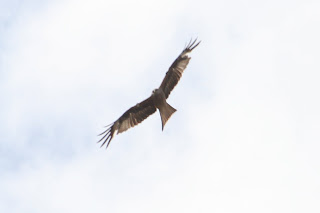 Bring back school shoes with a compass in the heel. 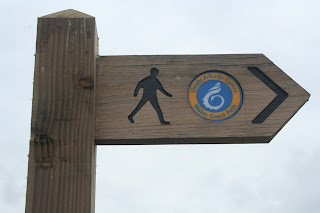 One of the talents fostered in students during my degree course was that of an enquiring mind. Never accept the norm always look at the other side of the coin was the mantra of some lecturers. This enquiring, questioning approach I believe is innate within naturalists and couple this the another trait of natural curiosity and you have a potent  'miserable old git' combination.


For a while now I've been troubled by the amount of 'essential' clutter that arrives to set up home on our open spaces including nature reserves. Multiheaded waymarkers announcing excitingly themed walks, metal gates, hard surfacing, boardwalks, interpretation boards, handrails, comfy seats etc. these are a modern day conservation success story.  Some will see these features as necessary contributors to getting people out to enjoy nature, others may view them as patronising rubbish - urban thinking for a countryside setting!

Down at the seawall off Newport yesterday I came across one of the newly branded waymarking posts for the Wales Coastal Path. I don't have a problem with the concept of a coastal path, as it's always been there, used mainly by local people. Which is my point, why is it that we all now need to be told where the path is? Are we expecting a rash of walkers confused by the seawall, saltmarsh, tidal estuary combination that they need to be pointed in the right direction to help avoid a lemming like disaster? Lets be honest if you're local you will be familiar with the path, if making a trip to visit the coast you'll be an experienced walker complete with stick, gaiters and map. So for who's benefit is the waymarked post? Probably the vast majority of the population who don't care a monkeys and who's nature deficit disorder is untreatable. 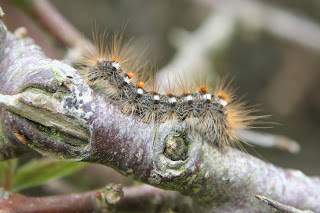 I suppose one benefit of encouraging those hordes of flip flop wearing walkers to stay to the path is they're less likely to brush against one of those nasty toxic brown-tail moth caterpillars. Yours opinionated.

Posted by Valley Naturalist at 07:36 3 comments: 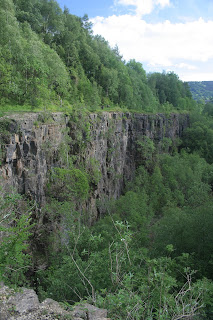 Could only spare an hour this afternoon so nipped over to the local limestone quarry in Abersychan for a bit of sweep netting. The longhorn beetle Grammoptera ruficornis was a nice find followed by the micro moth Adela fibulella taken from Germander speedwell. 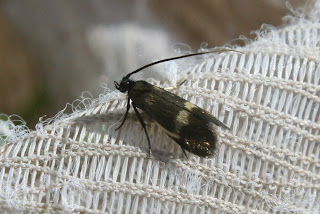 Posted by Valley Naturalist at 21:25 No comments:

Get off and walk 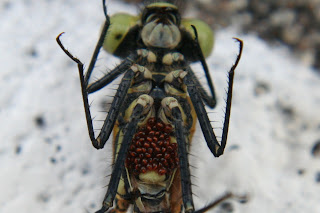 This large red damselfly was taken during some sweeping netting of a stand of Himalayan knotweed near the Lamb and Fox pub at Pwll ddu. On closer examination the underside of the damselfly supported a cluster of parasitic water mites. Seems this is a regular occurrence with the parasites attacking the underside of the thorax or around the lower end of the abdomen.
﻿ 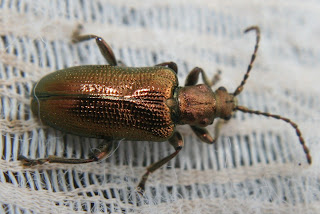 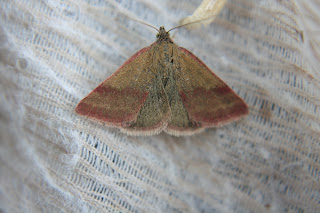 Posted by Valley Naturalist at 20:51 3 comments:

Some orchids from Llandegfedd today 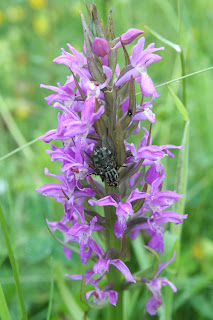 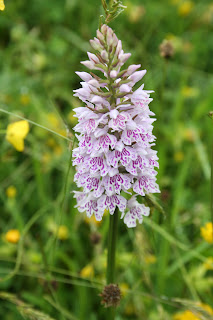 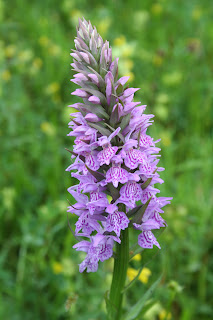 Posted by Valley Naturalist at 21:22 No comments: 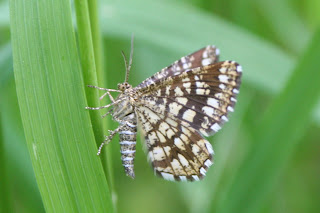 In my youth, I seem to remember, I had the occasional run in with landowners for climbing fences etc. and 'Oi! you buggers get off my land' was part of a normals days birding. At that time I vividly remember dismissing the corrective tones of a middle aged codger with a laugh and, depending on who's company I was with, the odd expletive in reply, but always followed by a gutless sprint to safety. Yesterday things turned full circle when a brief visit to Llantarnam ponds got me shouting 'Oi!' at three teenagers for chucking stones at a coot. As my deep authoritative tones were successfully buffered by the biomass of the Canadian pondweed invaded waterbody and the coot now flapped to safety, 'old git' was clearly audible from one of the youths. Rather than reply with something futile like, 'right I'm calling the Police' or ' I know who you are and I'll be visiting your parents' I chose not to challenge and with a sense of deja vu I turned to chase a latticed heath, preferring to reflect on the positives of three lads enjoying some biodiverse green space - these days a much rarer sight than either the coot or latticed heath. 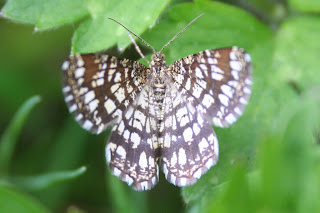 Posted by Valley Naturalist at 08:24 No comments: