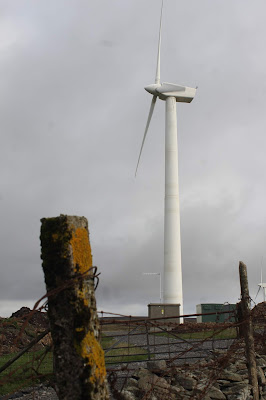 Early last Saturday I parked up in the mist of Mynydd Llanhilleth to walk around the interface between field and common land. Here the upland audio was dominated by a backdrop of whirling  wind turbines. Pausing at stile that signalled a footpath route across open farmland defined by margins of mature beech trees, I made way for a runner who passed the time of day and hinted at the imminent improvement in the weather conditions. 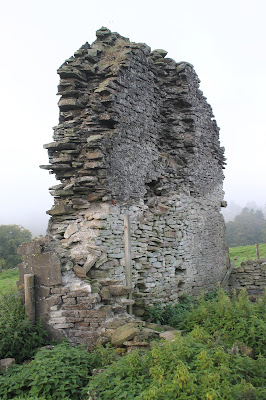 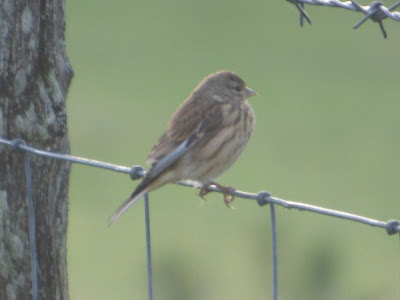 Over the stile and onward through a field the remains of a farm building provided a resting point for a pied wagtail. A mixed flock of goldfinch, linnet and meadow pipit moved between ground feeding and fence post loafing. A number of skylark were overhead. Onward through the grassland surrounded in majestic beech a willow warbler called from the depths of one such tree. 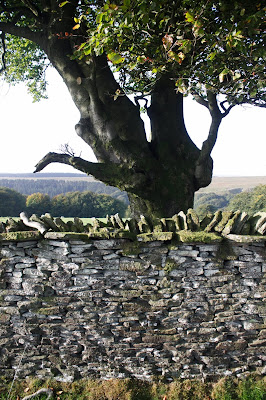 Through a farm gate I emerged onto open common land where a distant kestrel dropped out of the sky before climbing to hover again. The dry stone walls in this area appeared in good condition. Intrigued by the distant wind turbines I set off across the open landscape of bracken and species acid grassland to join a newly created access road. This gave me the opportunity to view the valleys landscape westwards and doing so I was struck by the amount of wind turbines that now litter this area. Counting south to north a total of exactly fifty could be seen. Heading back I encounted more skylark, a single female wheatear and a small copse supported a chiffchaff in autumn sub song.
Posted by Valley Naturalist at 09:22 1 comment:

It's just a Hobby 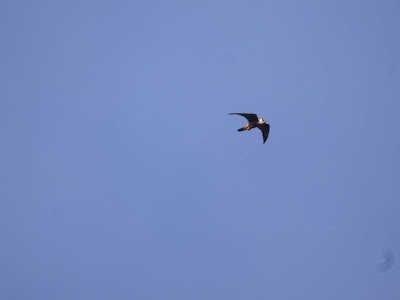 Another late post from last weekend I'm afraid. Nonetheless, I wanted to check out progress of the alpine clubmoss that I found last year on a spoil tip in Canada Tips area of Blaenavon. With the on-going issue of illegal off road biking there is an ever present threat of the plant being damaged of even destroyed completely. After a bit of a walk I scrambled up a rather steep sided tip and was thankful to be able to relocate this interesting clubmoss sprawling amongst the heather. A family of walkers breezed by as I was on my hands and knees parting the heather - a penny for their thoughts! 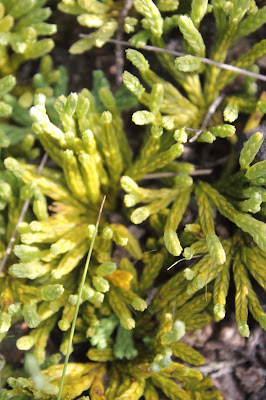 From the top of the tip I had a panoramic view of the rest of this expansive area of coal and sandstone spoil and wondered why I seem to be the only naturalist willing to search this landscape for wildlife. I suppose I'm old school, willing to investigate the wider countryside to record nature rather than sitting in a hide on a nature reserve - wheres the sense of exploration in that! 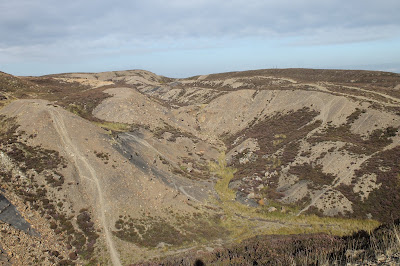 Down the other side of the clubmoss tip I stumbled but kept my footing as the loose material rolled away underfoot. There was a well worn path with recent bike tyre tracks that led to a rather attractive pond formed at the base of a couple of similar sized tips. The large hoverfly Sericomyia silentis alighted and a good number of emerald damselfly were still on the wing. From the stark barren landscape of the tips I emerged onto that typical upland mosaic of marshy grassland and dwarf shrub heath habitat. One of the red brick shelters that can be found over looking Canada Tips caught my eye so off I marched. 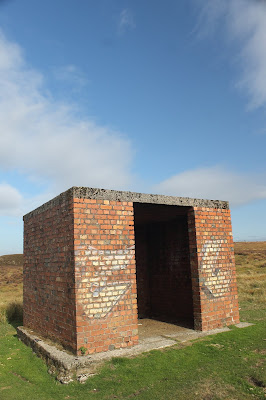 As if waiting for a bus I stood in the doorway of the building as a hobby flew low across the heather then climbing high against the late summer sky. A mountain biker peddled hard in the distance before picking up speed and disappearing behind a tip. The drone of a motorbike was an ever present but distant audio backdrop. On the track back a female migrant hawker briefly alighted and a wheatear moved from derelict concrete post to derelict concrete post flashing its white rump as it went. 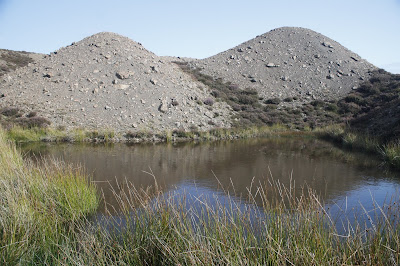 Posted by Valley Naturalist at 06:45 No comments: