Look I've got a tenner! On my way northwards this morning I was confronted by a lad at the roadside frantically waving a ten pound note. I suspect he was looking for a lift after an all nighter - would have stopped but for another car tight on my rear!

As the light was good with blue skies this mornings objective was taking landscape type photos in the Canada Tips area of the Blaenavon landscape. A wheatear posed briefly on a fence post before moving on out of sight and a stonechat called from a monoculture of heather. As the temperature improved odonata stirred  with emerald damselflies and black darter dragonflies the main protagonists. 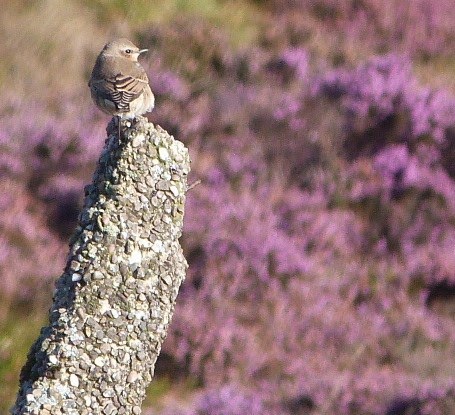 Posted by Valley Naturalist at 14:55 No comments: 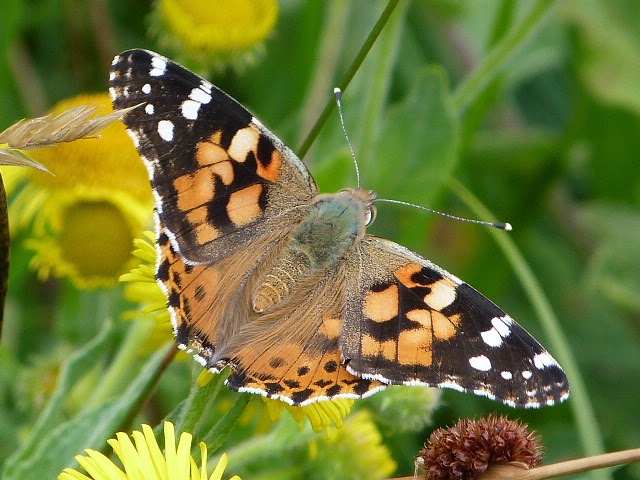 Two visits to Llandegfedd Reservoir over the Bank Holiday weekend produced contrasting fortunes. First up on Sunday afternoon the weather was good but passage bird count was poor. Singles of green sandpiper, redshank and three common sandpiper hinted at a slight wader movement. Other notables included four reed warbler, two tufted duck and two teal. There was a colour ringed lesser black backed gull amongst a group of around a 100 birds and a metal ringed Canada goose was also present. Both birds too distant to read any numbers.

Away from the birds, butterflies could still be found with meadow brown, small tortoiseshell, and common blue present in decent numbers. Singles of gatekeeper and small copper were noted along with a fresh looking painted lady feeding on the extensive stands of fleabane. Also Roesel's bush cricket could still be heard. 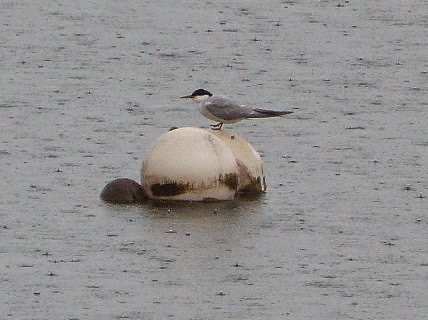 And so to Bank Holiday Monday. The rain had moved in and the cloud was low so it came as no surprise to find a fall of commic tern reported from the dam end. A quick visit was rewarded with two common tern on the buoy's close to the boating pontoons; a little egret was also present here along with two great black backed gull. 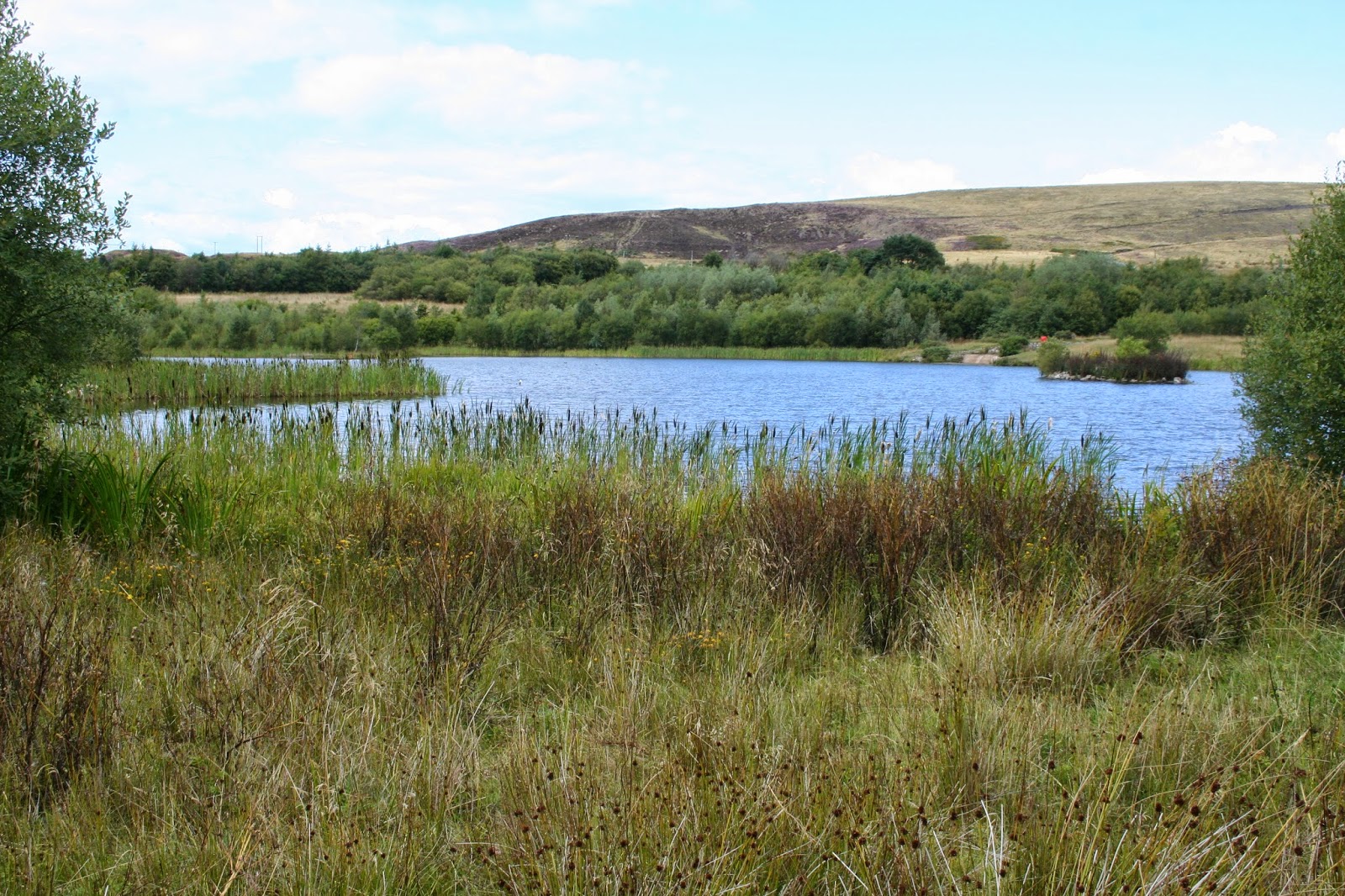 I was pleased to lead a walk for the Abergavenny Group of GWT from Garn Lakes Local Nature Reserve to the heather covered Coity Tip and on to Mile Pond. Around 30 attendees included botanical recorders Steph Tyler and Elsa Wood enjoyed a varied landscape from opencast restoration to old spoil tips, ponds and the tourist attraction that is the Pontypool and Blaenavon Railway. 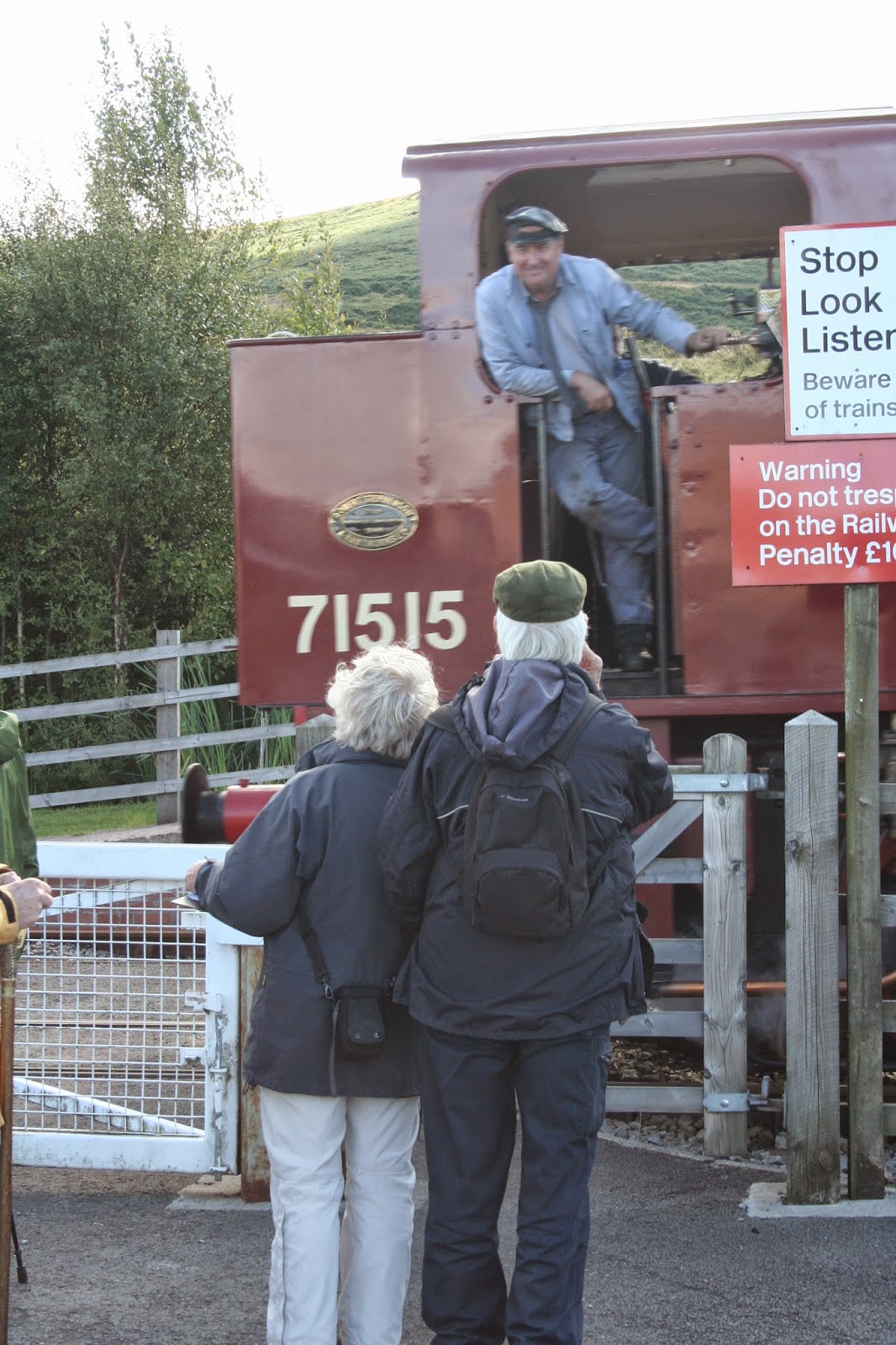 With the botanical season coming to close flowering plants were at a premium with monkey flower and devil's bit scabious the best on offer. At Garn Lakes there were up to 10 coot, a single little grebe and three tufted duck. I fear I may have flushed a sedge warbler from the lush marginal vegetation of the upper pond only to see it clattered by a sparrowhawk moments later. Later an adult little grebe with three young was present on Mile Pond.


Posted by Valley Naturalist at 10:58 No comments:

Footsteps in the spoil 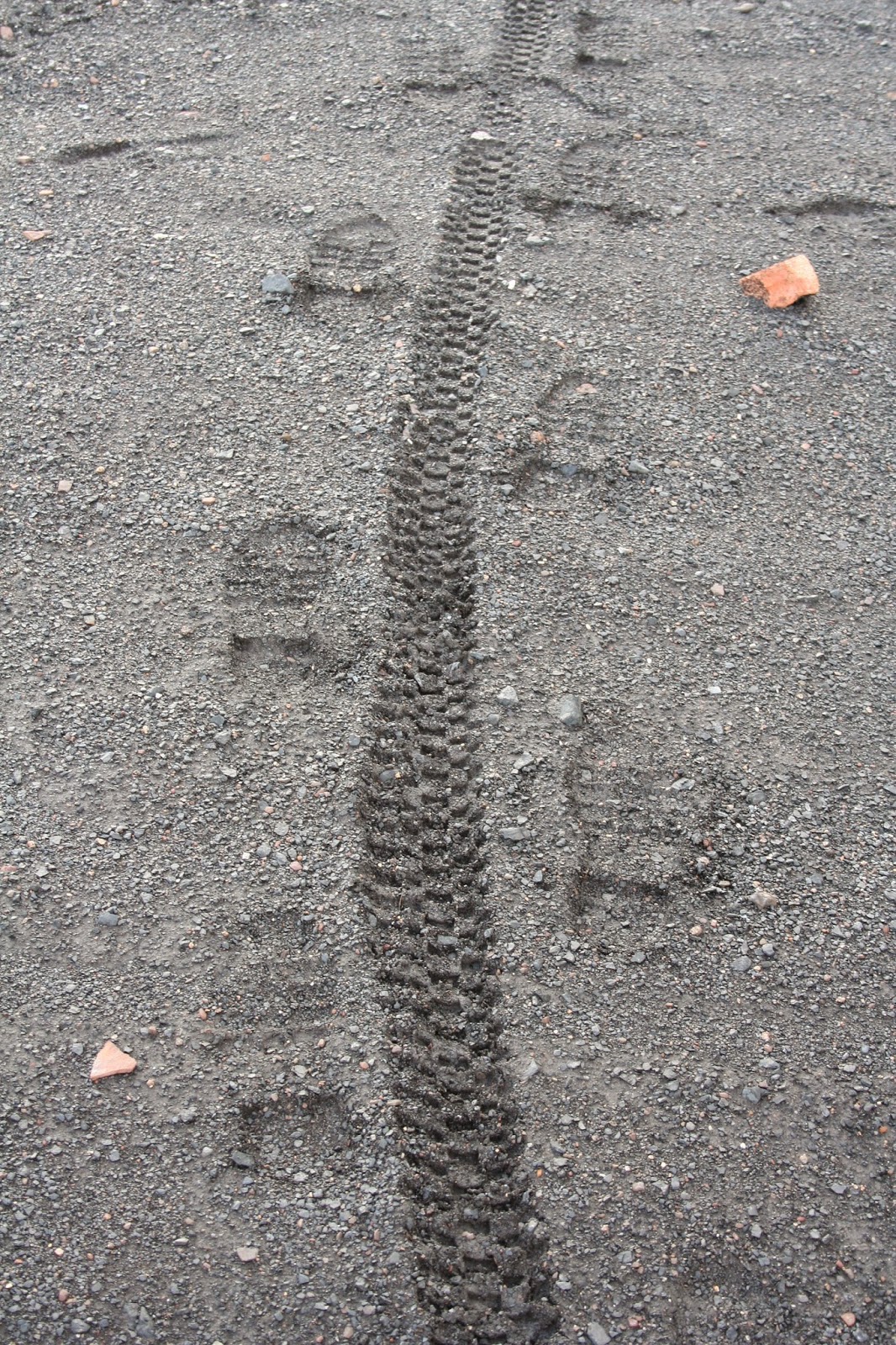 Its almost pure carbon but this plateau at The British is an informal recreation hot spot. Accessible space for local bikers, dog walkers, den builders and naturalists, an unholy alliance of outdoor user groups.

A late posting from last Sunday when the weather was a touch indifferent. Best of a poor bird bunch was a yellowhammer supplemented by linnet, redpoll and blackcap. Vascular plants included western gorse, bell heather, common centuary and the remnants of small cudweed. 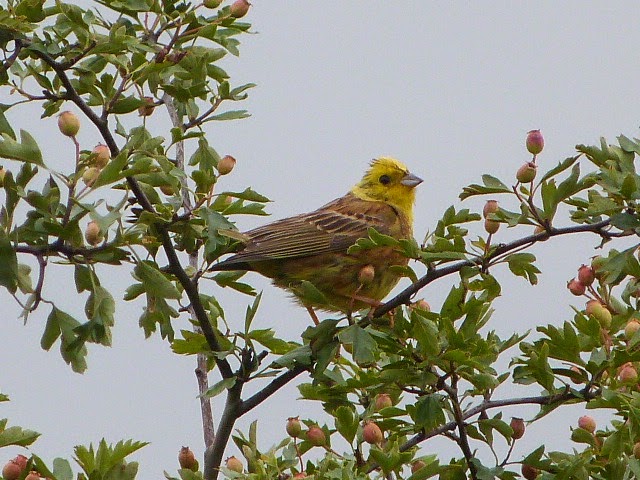 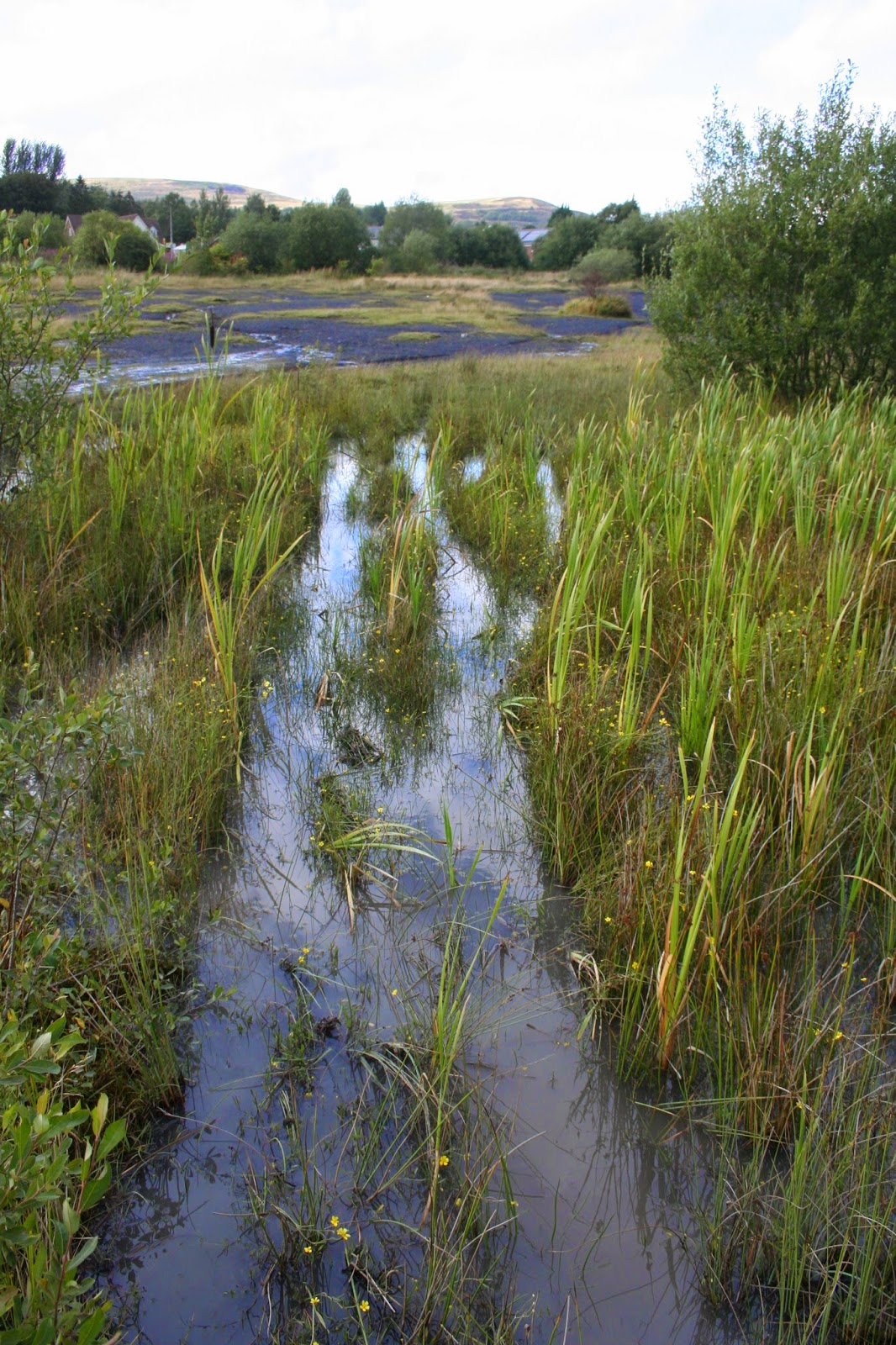 Off road drivers making a valuable contribution to freshwater ecology by keeping an area of a small pond free of vegetation. Who needs a team of conservation volunteers?

Posted by Valley Naturalist at 19:23 No comments:

It seemed fitting that shortly after marking another annual milestone I should choose to visit the site at which I was forceply encouraged to join the world. For a person wedded to the South Wales valleys and my socialist background to realise I was born in true blue rural Monmouthshire rather than on a rug in front of a coal fire is pause for thought indeed. Nonetheless I take comfort in the fact my birthplace is within one kilometre of that of Alfred Russel Wallace. 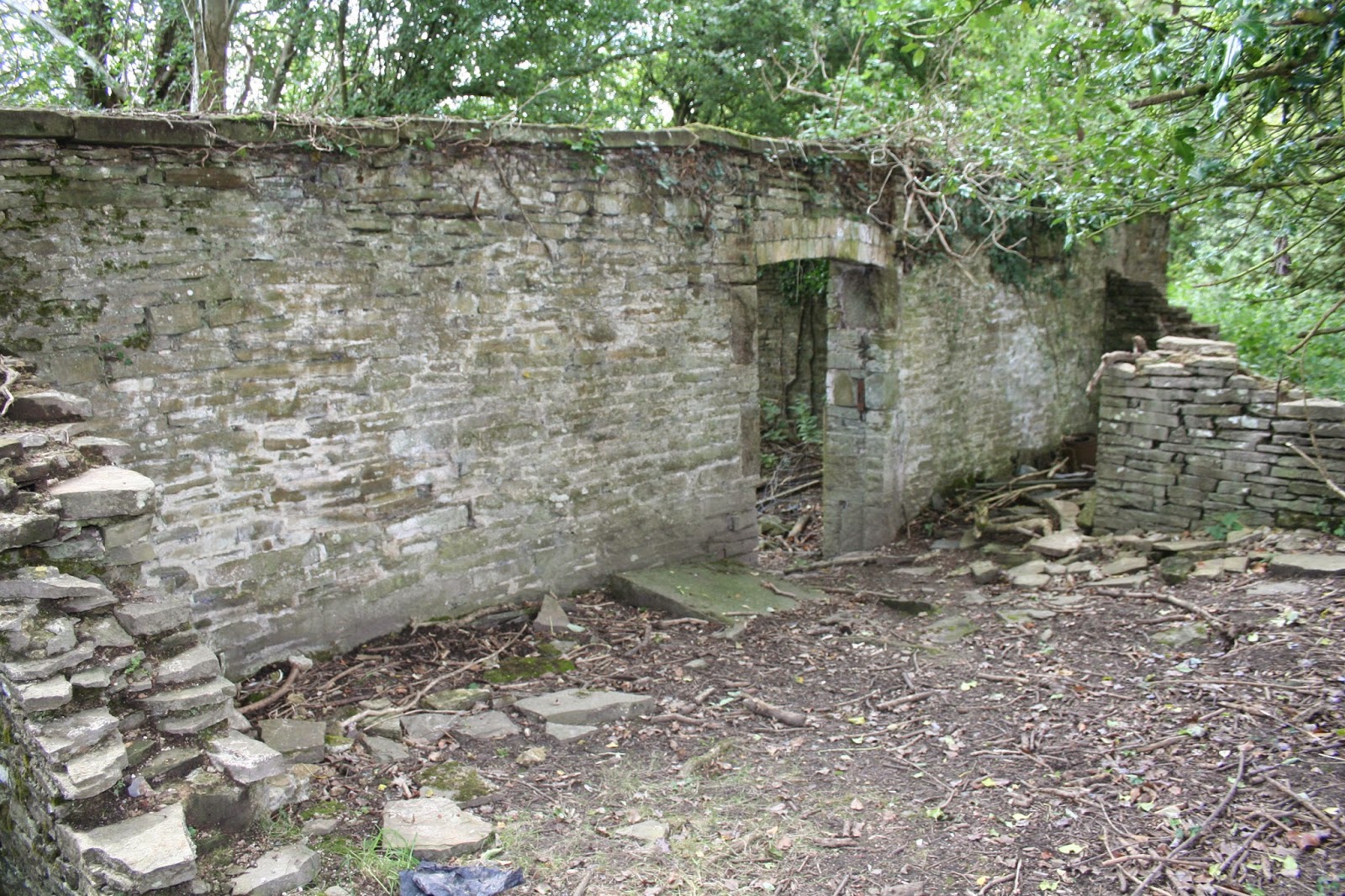 Cefn Ila was a former maternity hospital on the outskirts of Usk. Burnt down in 1973 the remnant buildings and manicured grounds gradually, over time, reverted back to a jumble of wildlife friendly habitat. Now under the ownership of the Woodland Trust the site and its surrounding grassland has been reborn. Extensive native woodland planting can be appreciated via a circular footpath that takes you to within touching distance of adjacent arable fields and the boundary fence of BAE Systems complete with keep off or you could have your legs blown off warning signage. 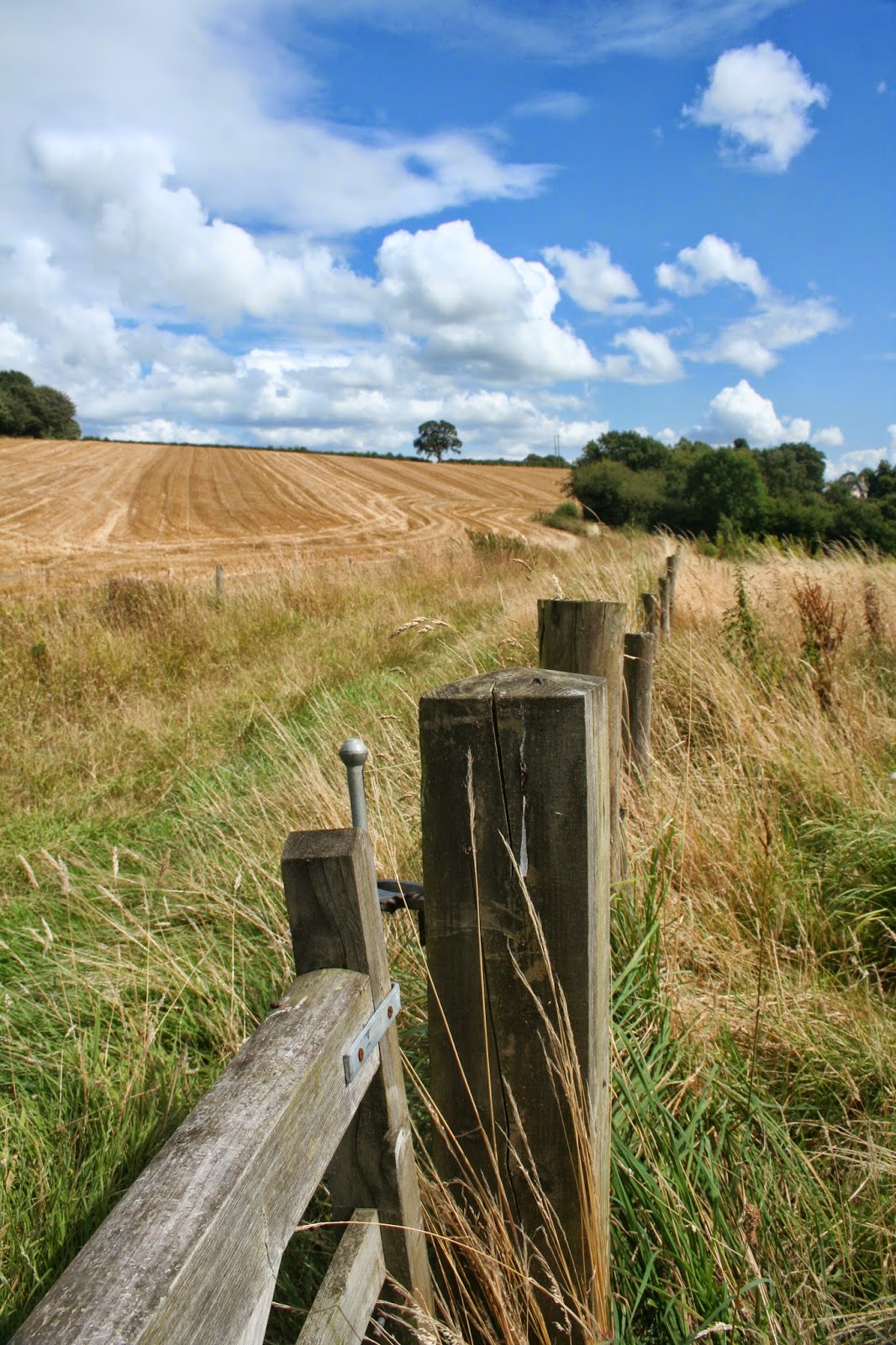 Much of the site with its oak and hazel planting is still young enough to qualify as scrub with long grass, thistle stands and bramble thickets all well represented. I had been tipped off by friend and voluntary warden Mike Kilner that a number of interesting invertebrates could be found on site. So the main purpose of my visit was to track down the attractively marked wasp spider. 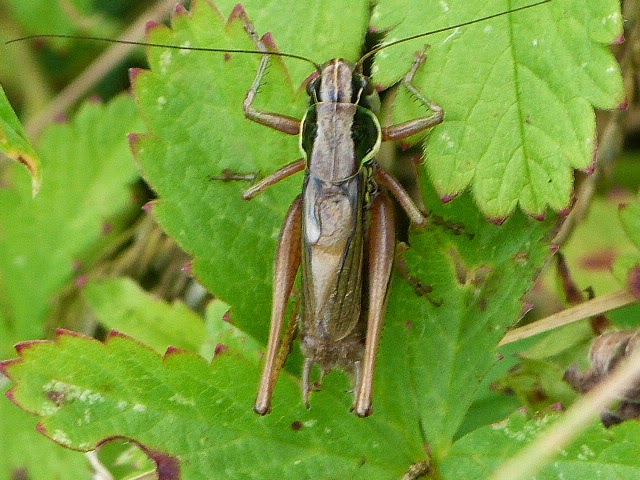 From the car park onwards the walk was dominated by the sound of summer orthoptera. Roesel's bush cricket was in fine voice. From the grassland thatch to arable field margins this in my experience is now the best place to see this recent county coloniser.  A hobby passed through at speed and a party of 22 mistle thrush passed over, otherwise it was only goldfinch, bullfinch and blackcap that dared to utter a note. Butterflies were dominated by meadow brown and gatekeepers with small and Essex skipper thrown in for good measure. But the jewel in the crown was a single wasp spider found adjacent to a footpath which obliged nicely for a number of photographs unperturbed by a middle aged naturalist rolling about in the roughage in an effort to get in position.
Posted by Valley Naturalist at 20:04 2 comments: