The oldest tip in the book 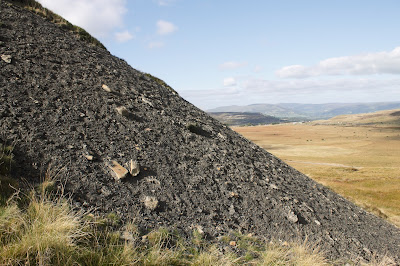 My copy of Martin Haigh's The Evolution of Slopes on Artificial Landforms, Blaenavon. UK (1978) claims this tip to be the oldest in the Blaenavon industrial landscape complex. Sitting in Mynydd Coity's ffridd habitat and overlooking the expansive Waunafon bog the tip with its large' black eye' of unvegetated coal spoil purports to originate from early Victorian times. Having promised myself a closer look I finally made the effort late Friday afternoon, scaling a hillside where nowadays only ponies and bikers dare venture.

It was some trek, through tussockly stands of molina that hid drainage ditches and rocks I came across long forgotten features of man's efforts to conquer nature. A pair of railway sleepers bridged a drainage ditch leading to a large rusty lichen encrusted water value that in turn revealed a small reservoir of open water with extensive margins of sphagnum moss. This legacy of water management paraphernalia seems to be off the radar of those who champion cultural both and natural landscapes.

Where gazing animals are able to browse there was dung with associated dung fungi and where the grass was short grassland fungi such as the golden spindles fungi Clavulinopsis fusiformis could be found. I took advantage of my elevated position to view Waunafon bog from the west and in doing so noticed a couple of distant walkers seemingly collecting magic mushrooms and a stonechat moving between thistle tops.

Having reached the tip it was something of an anti-climax. Not sure what I expected but the oldest tip in the book was much like all the other tips I've frequented doing my time as an advocate of post in industrial landscapes. Nonetheless the extent of mature dwarf shrub heath that clothed most of the tip hinted at its elderly nature. Why the eastern flank remains devoid of any green biomass is conjecture. Could be the angle of repose or a hostile chemical composition?  A fast running stream that emerged from the hillside cut its route close to northern side suggesting the tip was deposited almost slap bang on top of this running water feature. Another example of the lack of appreciation surrounding the dynamics of natural resources displayed by our industrial forefathers.

Scribbling in the margins

My latest biological recording excursion took me from the north of Garn Lakes Local Nature Reserve on through the disused railway cutting that forms the eastern margin of Waunafon bog. The deformed lichen encrusted fence posts that once prevented grazing animals from straying onto railway line are often good perching birds. And so it proved with meadow pipit, stonechat and a single whinchat all using these features intermittently. The most novel sight however was that of a nuthatch that took flight from a small willow only on alight onto one of these bogland fence posts. For a species normally associated with mature woodland, parks and gardens it was somewhat bizarre to see.

It was pleasing to still encounter a good variety of flowering plants complete with a number of noteworthy invertebrates. Along the disused cutting with its bed of limestone clinker was the non-native blue fleabane along with eyebright and fairy flax. These flowering plants were juxtaposed with heather, purple moor grass, bracken and willow scrub including a couple of specimens of creeping willow that seemed to prefer the edge of the railway cutting.

Butterflies were still on the wing including a number of common blue and singles of red admiral and small heath. A bog hoverfly and a caterpillar of the broom moth provided further colourful entertainment.

Posted by Valley Naturalist at 08:11 No comments: 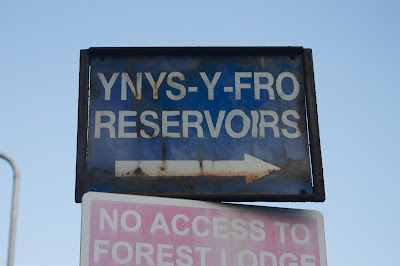 I've not really bought into this long distance twitching game, preferring to build up a picture of local wildlife is much more rewarding for me. That said should a noteworthy species occur within a twenty minute drive I will sometimes make the effort. A case in point was yesterdays grey phalarope at Ynys-y-fro Reservoir. A couple of weeks leave coincided nicely with this bird turning up.

Ynys -y -fro Reservoir has always been a little bit of an enigma to me. Well watched in the 1970s, 80s and early 90s coverage dropped off when Welsh Water invested time and effort in fishing and sailing largely to the exclusion of birdwatchers- there must be an answerable equality issue here?  For me a visit to Ynys-y-fro has rarely involved a walk around the lower reservoir due to a lack of clarity around access and a perception that the tenant fishing club has a monopoly. Wentwood Reservoir is just as bad littered with keep out signs thereby pushing birders and naturalists to the outer limits peering in like pervy voyeurs. This is why I cautiously welcome the new public access arrangements for Llandegfedd Reservoir. You never know should Jeremy Corbyn succeed at the next election we may eventually see our vital natural resources back in public hands with recreation services managed for all not just the few!

I digress. On arrival I scanned the distance shore unsuccessfully for the diminutive bird, only to discover it was feeding on the margin just four metres away. A supporting cast came in the form of a few pochard and a wheatear that incredibly was more obliging to the camera than the aforementioned phalarope. 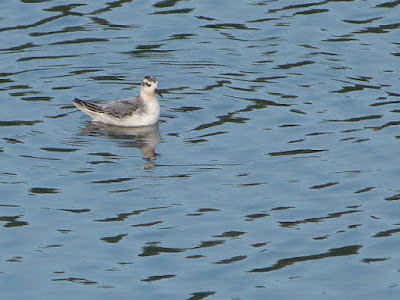 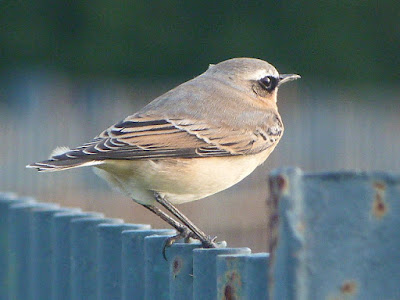 Posted by Valley Naturalist at 09:36 No comments:

Beside river and tip 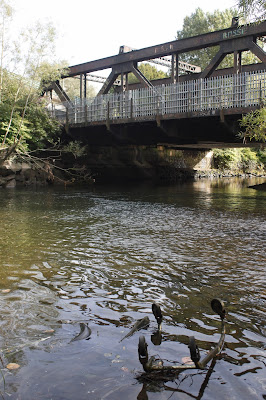 I'd intended to check Tredegar House Lake for gulls but a patch of rough grassland near to Newport tip caught my eye, and it was here I spent a couple of hours. The grassland led down to the edge of the Ebbw river where moorhen and shopping trolley were both at home. The late summer sunshine produced a good number of common darter dragonflies alighting on wooden fence posts and a discarded velour armchair. A couple of migrant hawkers patrolled to the sound of a chiffchaff in autumn sub song. A large stand of thistle were linked by the webs of fat garden spiders. I'm almost sure I heard the song of a Roesels bush cricket but a protracted search produced only long-winged conehead. 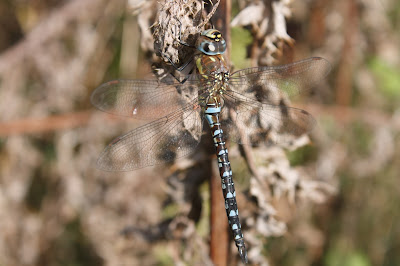 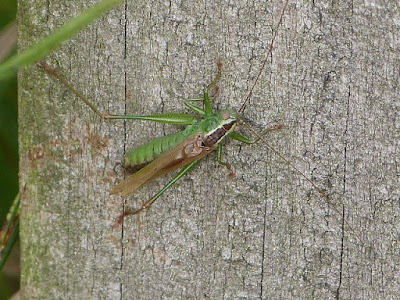 Posted by Valley Naturalist at 20:23 No comments: 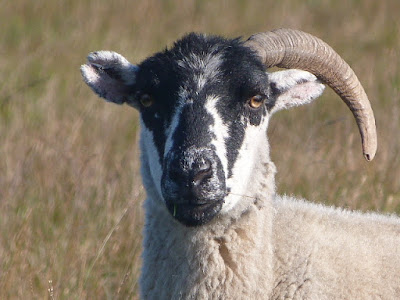 Cruet collar-moss (Splachnum ampullaceum) grows on aging herbivore droppings and with the landscape around Blaenavon now supporting a healthy herd of Welsh black cattle I felt a search was in order. Unfortunately the wet heath and rhos pasture in the Garn yr erw area produced nothing at all despite plenty of cowpats. This disappointment however was compensated by a good movement of upland passerines. Couple of wheatear were very mobile along with several skylark and dozens of meadow pipit. The willow scrub beside a small upland pond supported a reed bunting and a sedge warbler. A whinchat alighted briefly before flying out of sight. Somewhat surprisingly the same pond was home to a female tufted duck. Black darter dragonflies were widespread. 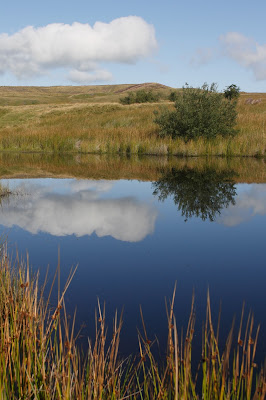 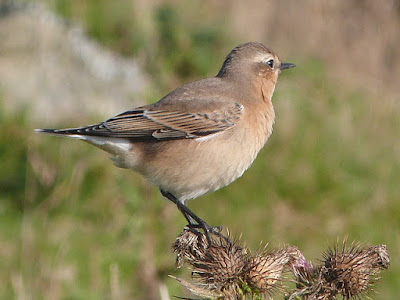 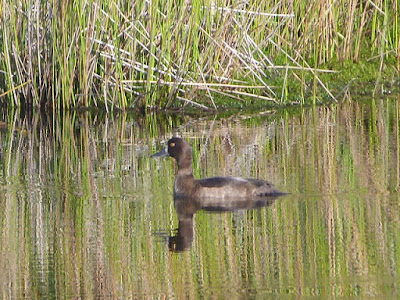 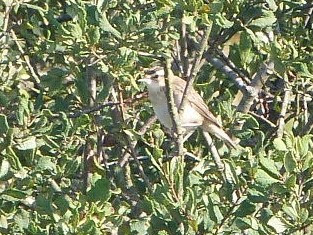 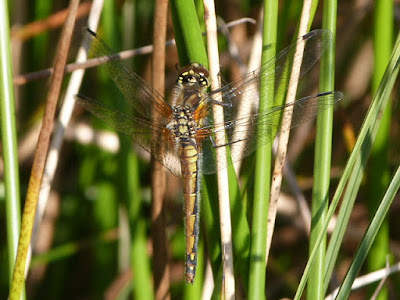 Posted by Valley Naturalist at 20:14 No comments: