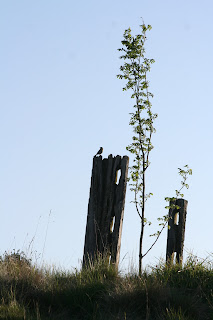 Reeling grasshopper warbler was this mornings aspiration. The fine habitat surrounding Waun afon bog is usually a banker for several of these secret little gems, not this morning though. A cuckoo, male reed bunting and two pair of stonechat filled the void. 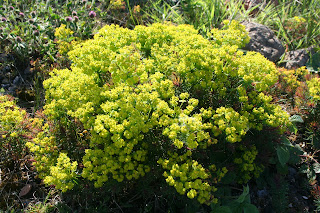 A yellow/green flowering plant caught my eye in a lay by in Blaenavon as I passed, so a quick handbrake turn got me parked up in no time. Turns out to be Cypress spurge a native plant on mainland Europe and some say southern England but around these parts will be a naturalised garden escapee. Not that its been recorded too often, The Flowering Plants of Monmouthshire has only three records.
Posted by Valley Naturalist at 09:35