Once there were Lapwing 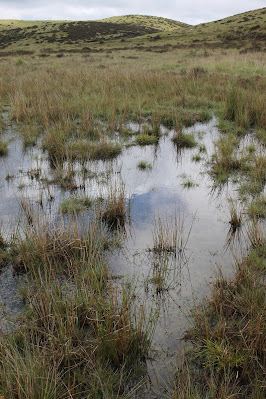 Waun Hoscyn is an expansive area of re-vegetating coal spoil between Varteg and Blaenavon. Its a site I once found breeding lapwing and snipe, nowadays lapwing are no more. During the hard times of the infamous miners strike I also remember seeing people harvesting surface coal from Waun Hoscoyn. Today, its only populated by the odd dog walker and golfer, pitching and putting in an area of sheep grazed acid grassland.
The habitat of coal spoil is a mosaic of bare ground, dwarf shrub heath, dry and marshy grassland. Its the marshy grassland that I find the most interesting - it often holds the highest plant diversity. Last Saturday morning started cold and overcasting but this didn't stop the skylark from singing. Although whinchat numbers seem to be in decline by contrast stonechat are doing really well. On this walk I recorded at least two pair. In an area of marshy grassland there was a meandering water course, dominated by common cotton grass on its margins. Here there was a good population of southern marsh orchid with a few scattered heath spotted orchid for good measure. In another flush I found a very small example of royal fern. This fern is listed on the rare plant register of Monmouthshire. 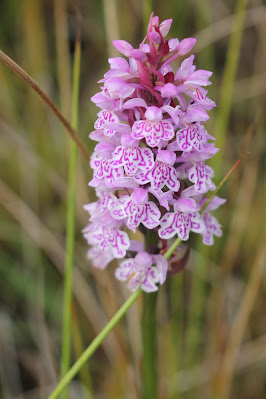 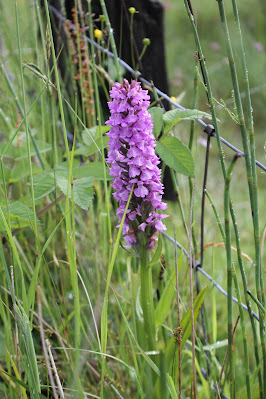 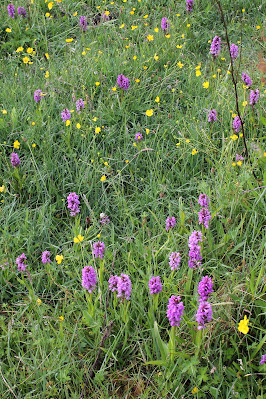 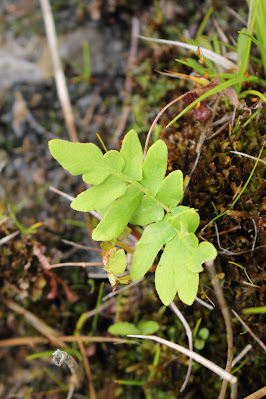 Posted by Valley Naturalist at 14:22